It’s been a long time but I never gave up on Vogue 1335. Here’s a peek at the finished item. 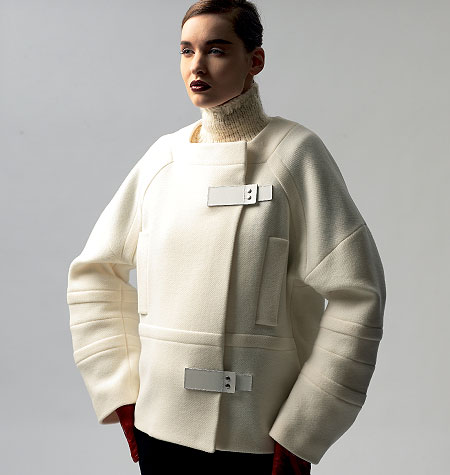 I’ve stuck fairly closely to Vogue’s interpretation of Marcel Marongiu’s vision (fasteners aside, of which more another time). However I don’t think the pattern as written has nearly enough interfacing to produce the rounded shape in the pattern photo. Vogue has you interface the facings and neckband only. I ended up interfacing the lot: the body, bands, welts and facings in fusible canvas; the sleeves in Vilene G405. I thought canvas might be a little heavy for the sleeves. Originally I wasn’t quite sure what to use for those. Normally I choose interfacings by going to John Lewis and having a feel of the different weights available, but my local branch seems to be reducing its range and I couldn’t find anything that seemed suitable when I visited. Clearly I was going to have to risk buying interfacing online. I picked out Vilene G405 after a detailed perusal of the options on the Vlieseline website – which incidentally is a fascinating read for a sewing geek. G405 is obviously one of Vlieseline’s less popular products because I could only find one online shop selling it in the UK: Moresewing on eBay. But one is enough. The fusible canvas (picture below) came from John Lewis – I hope they don’t stop stocking that! 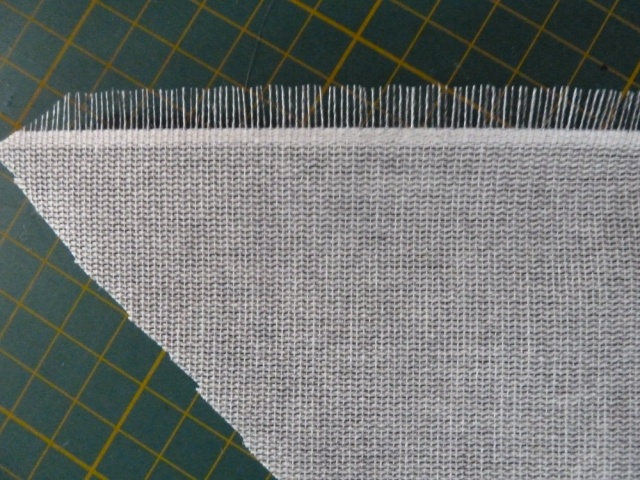 I think the sleeves worked out OK. They have the rounded shape from the pattern photo even without arms in them. With hindsight I think it would have been fine if I’d just used the canvas for the sleeves, but I’m glad to have discovered the Vlieseline website as it’ll take some of the guesswork out of buying interfacing online in the future.

Next time: a shaggy dog story about fasteners.

Recently I made up a pattern three times in the same fabric. I’ve made multiples of a few patterns but never with exactly the same fabric before. I can recommend it: the third dress is a definite improvement on the first. Repeating the project meant I could experiment with techniques to see what really worked. It helps that Burda 116-08-2011 is a seriously quick sew.

The fabric is stretch cotton poplin from Tissu Fabrics. I had it in grey, navy blue, and a very bright red.

The grey dress came first. It has no interfacing anywhere. The high collar at the back is a little saggy as a result.

I added interfacing to the inside collar on the next two versions. As the inside of the collar is cut in one with the dress it wasn’t entirely obvious where to stop interfacing. I tried two different ways. The best one was where I interfaced just up to the point where the shoulder seam joins the collar. (yeah, that’s some impressive poufiness over my stomach there. But that space is good, it means plenty of room for lunch and stuffing things into pockets.) 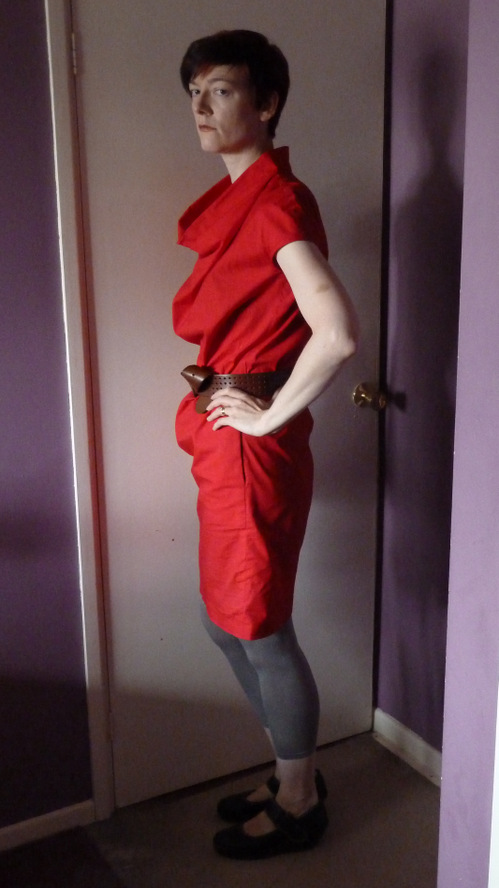 As it’s a Burda magazine pattern there was little to no detail about finishing in the instructions. I ended up with a lot of overlocked edges showing on the inside on the first dress. Here’s the collar and the edge of the cowl. 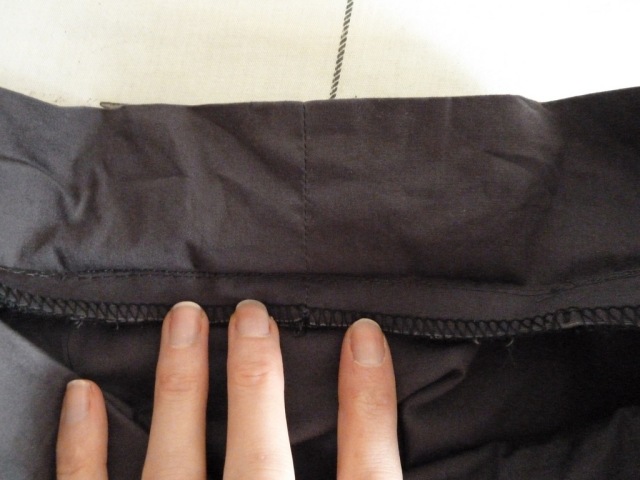 I’m not someone who is bothered by messy edges inside a dress if they are a lot of effort to avoid – who’s going to see them anyway? But I realised that finishing the collar more nicely isn’t any extra work. So for the next two versions I pressed the seam allowance on the inner collar underneath and stitched in the ditch from the outside to hold it down. Easy to do and it looks a lot nicer.

I bound the inside edge of the cowl with bias binding on the blue and red dresses. This isn’t much more work than overlocking the edge because my machine’s binding foot is completely foolproof. I say this as someone who still struggles with the rolled hem foot and has given up on the automatic buttonhole foot. Looks a lot neater.

The other thing I changed was the pockets. I can’t blame Burda because I didn’t follow their instructions in the first place, but the pockets on the grey dress are bit sad-looking. No interfacing at all; just a bit of top-stitching to try to keep the edge crisp. This one’s been washed a couple of times which makes things worse.

Here’s the red version, with interfacing on the front pocket edge. Both sides of the pocket bag are understitched. I skipped the top-stitching because it’s not needed. I haven’t washed it yet, but I’m pretty sure it will hold up better.

I like all three dresses and have worn them quite a bit over the last couple of weeks, but the red one is definitely a cut above the other two. I doubt I’m likely to make anything three times on a regular basis but I’ve certainly learnt a few things about using interfacing from this process. Anyone else ever do this? Was it useful?