So one thing about overlockers is that most of them come with a feature called differential feed. This lets you vary the ratio between the rate at which fabric is fed in and out of the area under the presser foot and needles. It is supposed to be a magical fix for tricky fabrics where seams won’t lie flat. If the seam is stretching out you make the inward feed faster than the outward feed, and if it gathers or puckers you make it slower.

This sounds great in theory and you can find loads of blog posts explaining it. It’s also what my machine’s manual suggests to do to correct stretched or gathered seams. But it never really works for me. I can see a small difference when I adjust the feed, but I often find I get gathered edges on lightweight fabric even with the differential feed down at the minimum. This sample is a case in point: three thread overlock seam finish on a lightweight fabric with the differential feed at 0.7 and everything else at the default settings. Awful. 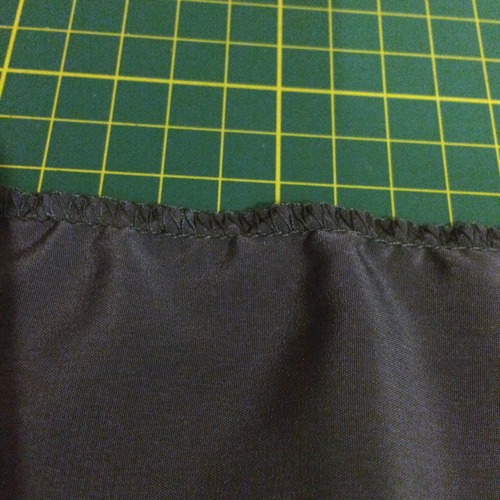 Does this happen to anyone else or is it just that my machine has overenthusiastic tension?

I made these leggings a couple of weeks ago but have only just got pictures of them. They are the Apple Peel leggings from the Pattern Magic 3 book. Pattern Magic doesn’t provide you with patterns, rather instructions for drafting your own pattern from a block. I drew up a stretch leggings block from Metric Pattern Cutting for Womwn’s Wear and used that as the basis for making the pattern. The rippled effect comes from adding length to the outer leg so that the shape of the leg ends up like this. Hence the name.

The style is obviously intended for two-way stretch knit fabrics, but mine are made up in a very stretchy mystery stretch woven fabric which I happened to have on hand. I probably should have used a knit. The draft needs fine tuning to fit my legs and the woven is less forgiving than a knit would have been. As it is, they’re more than a little tight on the calves. They’re also slightly too loose on the thigh to keep the ripples firmly in place there, but I suspect they’d become uncomfortable if I took them in.

They’re very easy to make up. I did all the sewing on the overlocker in this order: inside leg seam, crotch seam, outside leg seam, waistband, hems.
You can’t see it in the pictures, but the waist is finished with a straight waistband with elastic inside. The waistband folds over to enclose the elastic and then the whole thing is overlocked onto the waist. I didn’t have any wide elastic on hand so I flatlocked two narrower lengths together on the overlocker. That worked well enough from the point of view of making a functional waistband, but unfortunately the flatlocking shows though the waistband fabric so I’m only going to be able to wear these with a top that covers the waistband.

I also used a flatlock stitch to do the hems. This is a finish I hadn’t tried before. I found this tutorial while I was working out how to deal with the elastic, and gave it a go. It worked OK, although being a first attempt and on a very small circumference it’s not perfectly even. However it has stood up to a couple of wears, and I wasn’t confident a twin needle hem would have lasted beyond the first try on. I’ll definitely use the technique again.

Cleaning the sewing machine is a never-fail way to kickstart the sewing mojo. Cleaning and threading the overlocker, even more so. Clearly I haven’t been lacking in mojo lately because ewww.

I wanted to switch from three to four thread mode on the overlocker which meant inserting a second needle. I have trouble getting needles into this overlocker correctly. I sometimes even have a needle slip out while sewing because I haven’t tightened the screw enough. And this time, something seemed obviously wrong because when I put the second needle in the eyes didn’t line up. No mention of this in the manual. No amount of undoing and redoing, trying different needles, or fiddling with the screws made the slightest difference. Eventually I resorted to the Internet. And apparently they’re not meant to line up! How have I never noticed this before?

I’m never quite sure how often to change the needle on the overlocker. I change the sewing machine needle for most new projects, but I’ve been using the same overlocker needle for a while. The tension on the overlocker was being more than usually temperamental recently so I decided to treat it to a new needle. When I got the old needle out and had a good look at it I realised I should have done that a long time ago! In the picture below the needle from the overlocker is the one on the bottom and the top one is a brand-new universal size 90. 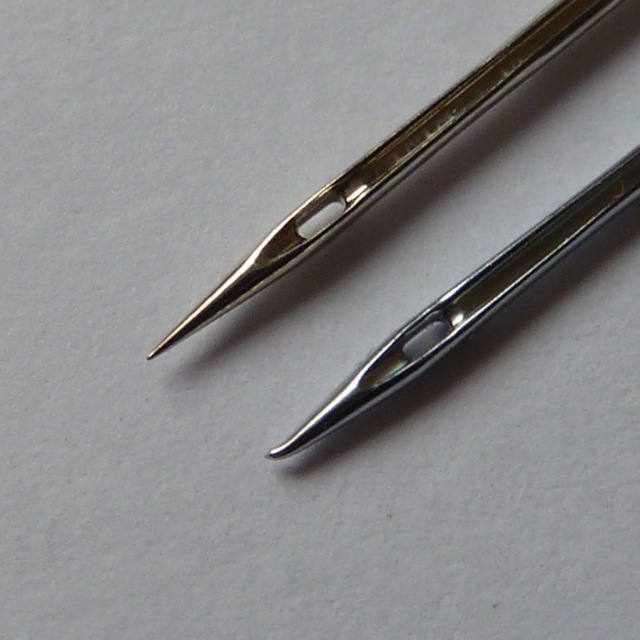 No wonder things weren’t quite right. Here’s the universal needle next to a new stretch needle. That’s more like it.

After the change of needle and bit more fiddling with the tension the overlocker is working smoothly again. Phew.

Fashion has yet to invent a hat that doesn’t look like a flowerpot on me. But on Friday it was snowing as I walked to work, and I ended up having to dry my hair with paper towels in the Ladies. I don’t do umbrellas; I always lose them. So without further ado, here’s my new flowerpot:

It started out as half a metre of black wool jersey I’ve been keeping in my stash for nearly a year. Most of the piece became a long-sleeved t-shirt but as usual it turned out I’d bought too much yardage. I always intended to make a hat out of the leftovers, but didn’t get any further at the time than finding a suitable hat tutorial on the Internet. By the time I finally made the hat I’d lost the link to the tutorial.

However I acquired an overlocker this year, a device which I find induces a spirit of complete recklessness in sewing. It’s something to do with its whirling blades of doom. I made the hat according to what I could remember of the tutorial. I sewed the jersey into a tube of about the right circumference to fit round my head and then sewed a straight seam along the top. The next step I find almost impossible to describe or draw. I wish I could find that tutorial and link to it! You flatten out the fabric along the top seam, letting the sides fold underneath, so you have a right-angle at each end of the top seam. Then you sew two seams at right angles to the original seam, cutting off the corners. I’m not sure what was supposed to come after that, but I chopped off the other end of the tube, folded it in two, and overlocked it back onto the cut edge to make a ear-warming band.

The top has little pointy bits where the ends of the seams are, which I quite like. From this angle it doesn’t so much resemble a flowerpot as an attempt at medieval costume. 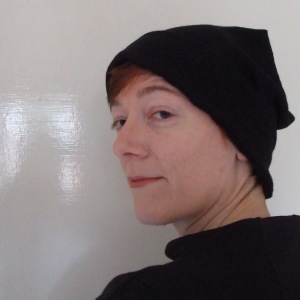 I am certainly going to wear it. And if anyone knows the tutorial I have lost, do let me know so I can link back to it.

Here’s the first fruit of the overlocker. It’s model 128 from the October 2010 Burda.

And here’s Burda’s version. I notice that the image file from the BurdaStyle website is named something along the lines of ‘Burda Star Wars’ so the science fiction effect is obviously intentional! Personally I think it’s more 1980s cyberpunk than Star Wars. I’m having a hard time thinking of anyone in Star Wars with a short skirt. Princess Leia’s gold bikini does not count.

The original version is made out of real leather and stretch gabardine, but mine’s pleather and a stable viscose jersey, which seemed to work pretty well. I ended up leaving out the centre back zip from the original and I can still just about get it on as the fabrics have quite a bit of stretch. I prefer the look of it without the zip. I’ve just realised I skipped the shoulder pads too. Clearly they aren’t all that vital.

I had lots of problems with the fit. I didn’t make a muslin and ended up having to unpick stitching on the pleather. Luckily I was taking in rather than letting out so the original stitching holes are hidden. The back still isn’t quite right but I think it’s as good as I can get without taking the whole dress to pieces and starting over.

I’m not entirely sure if this dress is going to get worn or not. It’s certainly not casual, and a bit over-the-top for work. Maybe in winter with opaque tights and boots? And accessorized with a blaster. 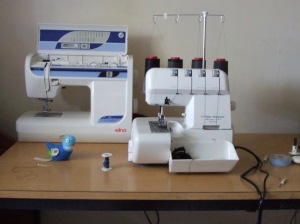 Recently I bought an overlocker. I’ve been assured that once you get one, you’ll wonder how you ever sewed without it. I duly tried out all the stitches on mine and then decided I’d wait for the right project to come up before I used it for real: one where the fabric was something I wouldn’t mind destroying if it all went horribly wrong.

Well the best laid plans, etc etc. My sewing machine flatly refused to sew the viscose doubleknit fabric I am using for the current project. So I nervously threaded the overlocker and fed a fairly straight seam into it. And then a curved one. And then I sewed the sleeves in. It’s brilliant. It sews through just about anything and it’s seriously fast.

But there’s one thing about it that surprised me. Regular sewing makes quite a bit of mess – at least I’m always surprised by the state of the floor round the sewing table. But the overlocker spreads its fuzz even further than the sewing machine. Specifically, all over your face. I don’t notice it until I take my make up off, but the cotton wool comes out grey! Does this happen to anyone else?

Much food for thought about my fitting problems with Vogue 8633 – thanks everyone! The black version is underway and looking hopeful so far. And it’s distracting me from the fact that my new overlocker has not arrived.

I’ve been dithering over purchasing an overlocker for months. There are so many models on the market and I’ve never used one before so I’m not quite sure what I’m letting myself in for. I read lots of reviews on Pattern Review and was none the wiser as to which model to go for. Eventually I took myself down to my local sewing machine shop and asked for advice. I eventually decided on a Frister+Rossmann Knitlock 2/3/4 thread. It seems to have a good range of features and I’m promised it’s suitable for a beginner (and the shop throws in a couple of lessons which I think I am going to need!)

Unfortunately it was not in stock. It was supposed to come in on Wednesday but hasn’t, so fingers crossed for next week. Not that I have anything planned to sew with it yet…but I really want to have a go at threading it.