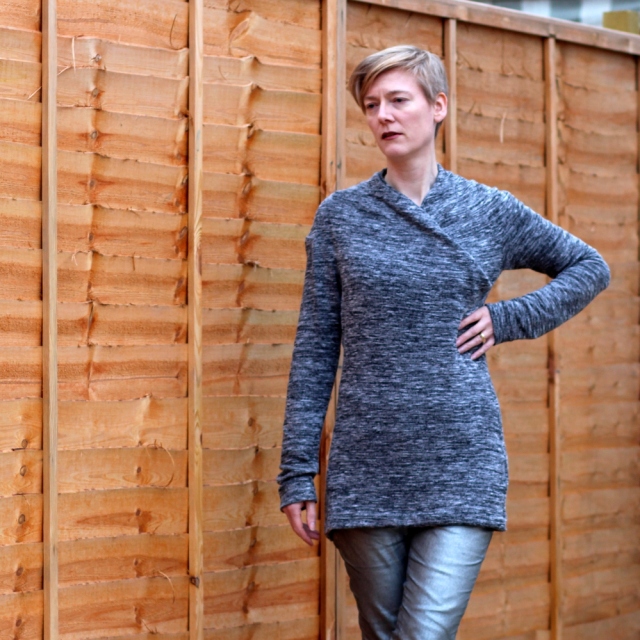 This was a quick but not an easy project. The pattern is Burda 114A 11/2011, a fairly simple wrap over knit top. The pattern photo shows it made up in a very loose and drapey sweater knit; you can see it’s slightly transparent.

I got some fairly similar stuff from Croft Mill’s sale recently. It was an end of roll so there’s no more available. It’s a loosely knitted polyester sweater knit in various shades of grey, black, and white. It came with a warning that it was tricky to sew and they weren’t kidding! You can stretch it a long way and it doesn’t snap back. I spent a long while trying to get it arranged on grain and without tension before cutting, but one of my sleeves still ended up 10cm longer than the other, and the back hem edge was on a steep angle. This was particularly obvious because the fabric has a subtle striped effect. I took my shears and cut the extra fabric off freehand, following the stripes, to end up with two matching sleeves and a hem that is on grain. I think it’s worked surprisingly well considering how misshapen my first attempt was. I really should have cut the whole thing out single layer. 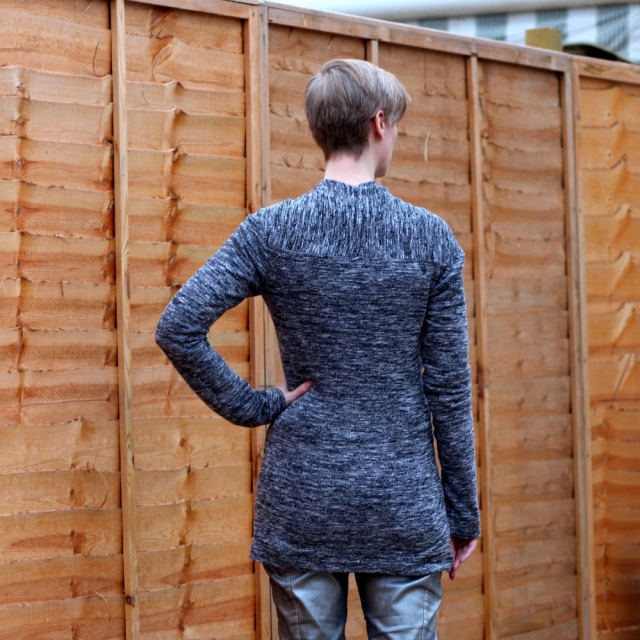 Most people who have made this recommended going down at least one size. I did size down but I also made my usual length additions and they weren’t needed. The sleeves are meant to be extra long anyway, but I think the body has come out much longer than on the model photo. 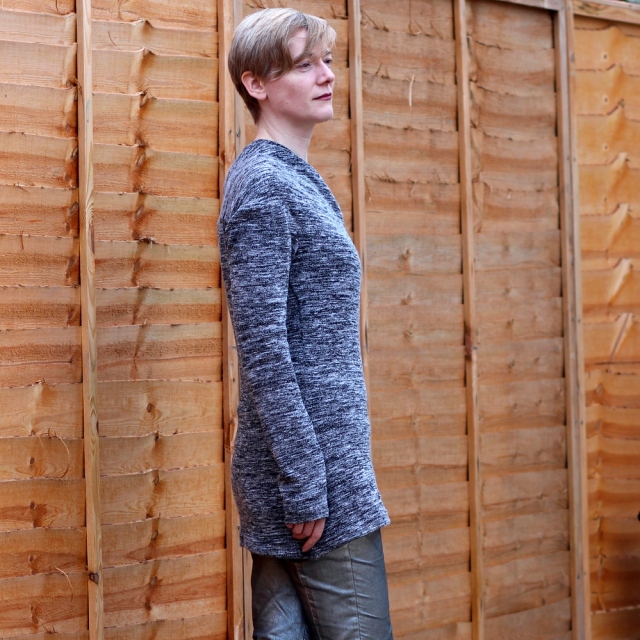 The neckline on the model photo is very low but most people who have made this have found it comes up much higher and more wearable, me included. I can arrange it to be lower but it naturally settles as you see it in the photos.

I constructed this mostly with a straight stitch on the sewing machine using a ball point needle and slightly lowered needle tension. I tried the overlocker on a few seams but it didn’t like the loosely knit fabric at all. The fabric caught around the loopers at one point and required some vicious hacking with scissors to free it. The overlocker seems to have survived the experience but I lost a bit of width from the top around the bust area (I regretted using only 1cm seam allowances) and after that I didn’t risk overlocking again. I left the remaining seam allowances raw and sewed the hems with a wide zigzag positioned to go over the raw edge of the hem allowance. Hopefully it will hold up. Knits generally don’t ravel but this one might be an exception.

I really like the finished top. I’ve seen a few versions of this in more stable knits and those looked pretty good too, so I might give it another go at some point. In a more stable knit this would be a great first knit project because there’s no neckband to deal with. I think I need a break after this particular version though; my next project is going to be made from nice well behaved denim.

Thanks to my husband for taking the photos.