This is Vogue 1305, a dress that at first sight might seem hopelessly impractical. It’s floor length, with only one sleeve and an open back. But it’s made for knit fabric and with a little bit of tweaking I think there’s an interesting but wearable summer dress to be found here. Here’s the envelope photo (no link to Vogue because the pattern’s no longer on their site):

I checked out a few reviews before making this and I’m very glad I did! Thanks to Erica Bunker, Helen Sadler, and The Mahogany Stylist for very useful information about this pattern.

It’s clear that it runs amazingly long. I normally add four inches to Vogue patterns and I didn’t add a thing to this; it’s still slightly too long for me. Other than in length it is unusually small. I normally make a 10 in Vogue; this is a straight 14 and it’s just right. 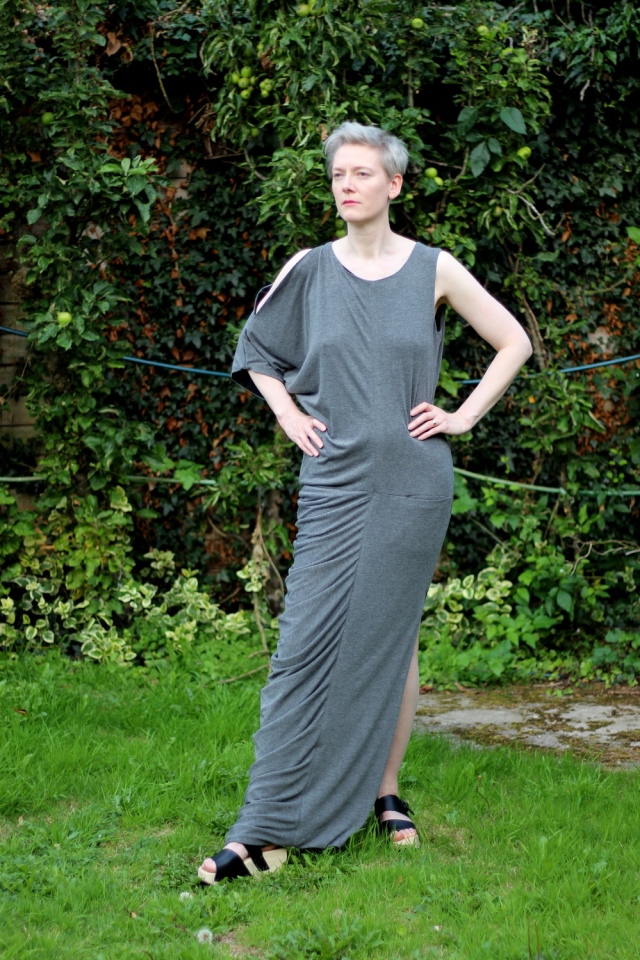 The shell fabric is a lovely viscose jersey from Croft Mill which was a birthday present. The lining is a black polyester mesh from Tissu Fabrics; no link because it was an end of roll. Matching coloured lining fabric would have been slightly better than black  because the dress is lined to the edge, but grey mesh wasn’t available.
So on to some details. The left side has a walking split. As drafted it’s very short which makes this practically a hobble skirt. I lengthened mine to just above the knee so I can walk comfortably.
There’s a tiny bit of lining peeking out at the left armscye despite understitching. I should have interfaced the seamline there and also around the neck.
I added pockets by creating a horizontal seam across the front and putting inseam pockets in there.

Here’s the right side with all that wonderful draping. Several reviewers mentioned that their drapes flattened out and they had to sew pleats into the side seam to get the correct effect. Mine fall the correct way naturally. I suspect the difference might be that I didn’t skip adding the lining, which gives the shell a bit of extra support because the lining and shell seam allowances get sewn together down the right side seam. I also fused a strip of interfacing down the centre front and centre back seam allowances to help support the weight of the drapes.

The original style has a centre back opening that goes down to the hips. I shortened mine to just above bra band level.

The dress isn’t very forgiving when seen from the back. It really clings at the hips; I’m very glad I made my true size which has a small amount of positive ease there.  Even with that wiggle room it pays to choose undies carefully. I’ll admit it took a lot of trying to get a photo of the back I was happy to put on the Internet. Not that this will stop me wearing it. 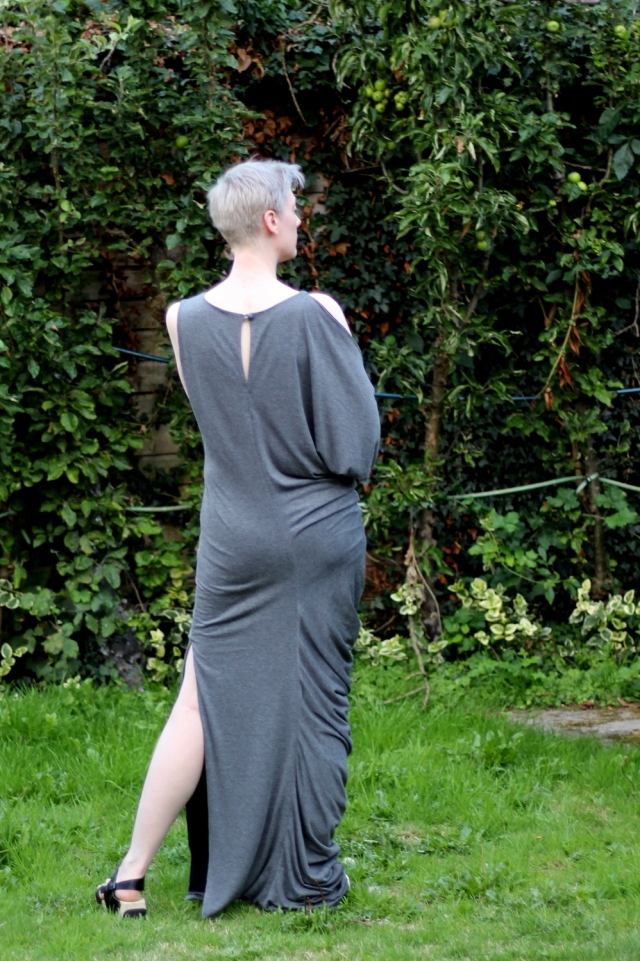 The pattern claims that you can wear the dress in a second way by putting your head through the sleeve seam opening. In fact if you look up photos of the designer original (I’ve collected a few on my Pinterest board for the pattern here) it’s worn that way in some shots. And it’s true that you can wear it like that, but only if you don’t mind the world seeing an inappropriate amount of chest though the original head opening. It’s OK if I stand extremely still but I will not be wearing it in real life like I am in the picture below. 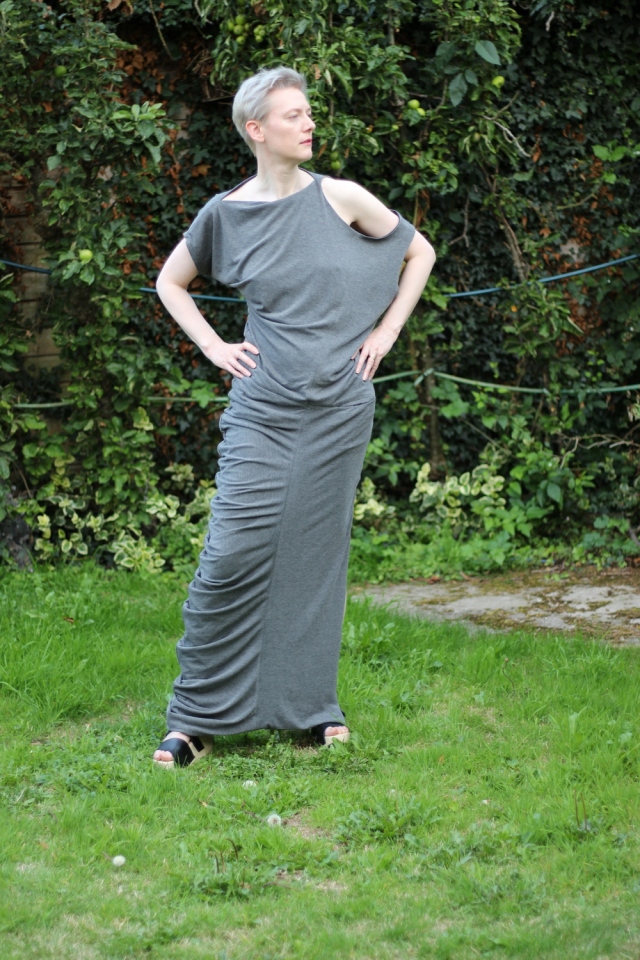 The pattern itself was a lot of fun to sew. The lining is inserted by bagging out so there is no hand sewing in this dress other than attaching the button. I constructed it all on a regular sewing machine – I threaded up the overlocker but never felt the need to use it. The instructions were fairly easy to follow but it helped that I’d made this sort of thing before.
This definitely isn’t a good ‘first knit’ project because the pattern pieces are huge. They were pretty difficult to cut out because I only had space to do one at a time. It really was a case of cutting piece each in turn while praying Vogue’s layout was correct and I wouldn’t run out of fabric on the last piece. Adding the pocket seam made the cutting out easier by reducing the size of the front pieces. It did all work out in the end but it was much the hardest part of making the dress.

One problem I noticed about the pattern: there are incorrect bodice lengthen/shorten lines on some of the pieces in my copy. And most people will want to shorten this dress.

So what’s the verdict? I love how it looks. It’s not quite as easy to wear as I’d hoped; a few inches off the length would help. I certainly couldn’t wear this to work. I can see myself making a shorter version at some point though.