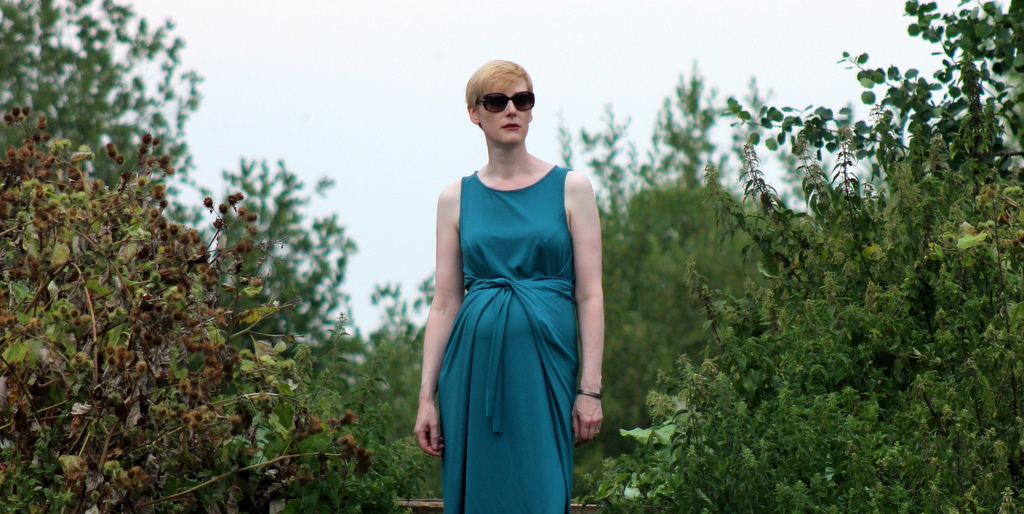 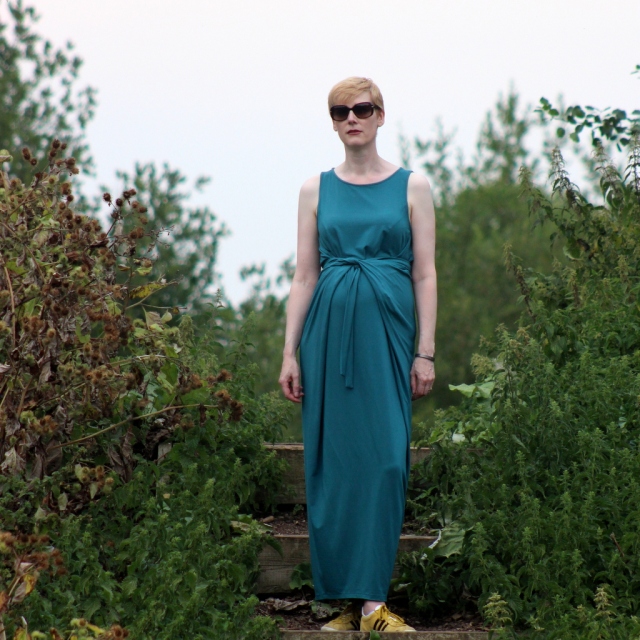 This is the Kielo wrap dress from Named Clothing that it seems like everyone’s made this summer. Understandably: it’s flattering, comfortable, and very quick to sew. I bought the pattern when I saw Laura’s lovely version, and ended up even copying the colour she chose.

I hadn’t made a Named pattern before and as my pre-pregnancy measurements fall between two sizes on their chart I made the larger of the two. This was a mistake as the finished dress is slightly too big for me. If you look closely the bust darts are too long, the armsyce is rather too deep, and the back is baggy. Not that any of that has stopped me wearing it a lot. It got five or six wears before it even got photographed for the blog. Another thing to be aware of is the length. The patterns are drafted for fairly tall people to start with, but according to the chart I still should have added two inches. After measuring the pattern I didn’t bother, as if it was much longer I’d be tripping over the hem. I love a pattern I don’t have to add length to.

I bought the PDF version of the pattern. I normally avoid PDF patterns, but this one comes with a non-overlapped copy shop version which makes it as easy to use as an envelope pattern – just print it out and cut. A nice touch is that the PDF is layered with one layer per size, so if you fit into a single size (and I think many people would in this dress as it’s only fitted at the bust) you can print off just the layer with your size on it and not have to worry about which line to cut out on.

Here’s the back view. Although the dress is quite narrow the long vent makes it easy to walk in. I should have taken those darts in a bit. 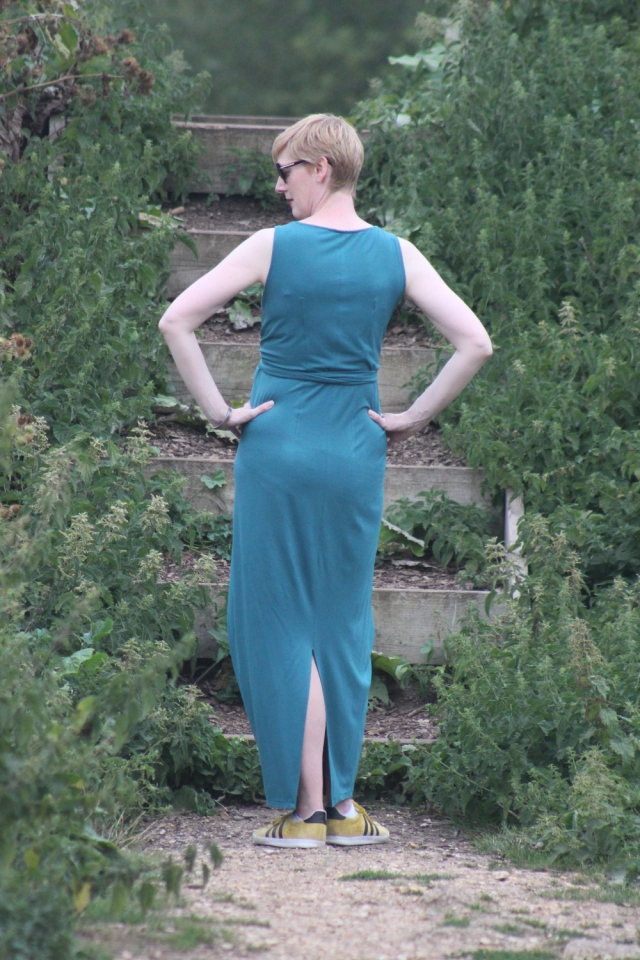 The only pattern adjustments I did were to make the ties slightly longer and to add inseam pockets. The pockets were very easy to do: I drew shapes on the pattern something like this, and then traced them off as a separate pattern piece. 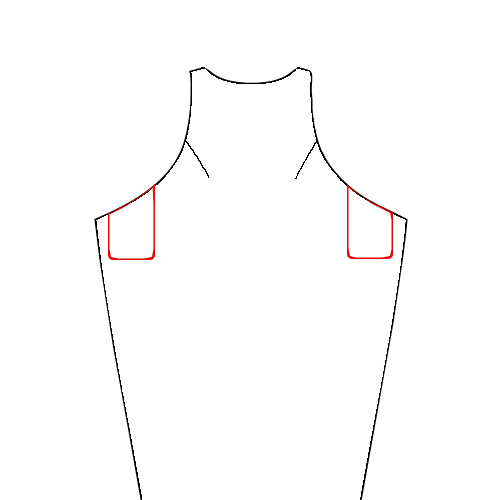 They aren’t the roomiest pockets but they’re a good deal better than nothing. Reality in blogging: I’ve got my keys in them in all the pictures in this post which you can see if you look hard. Another time I’d position them further up the side seam, away from the ties and closer to the armscye. This would make them a lot easier to access. 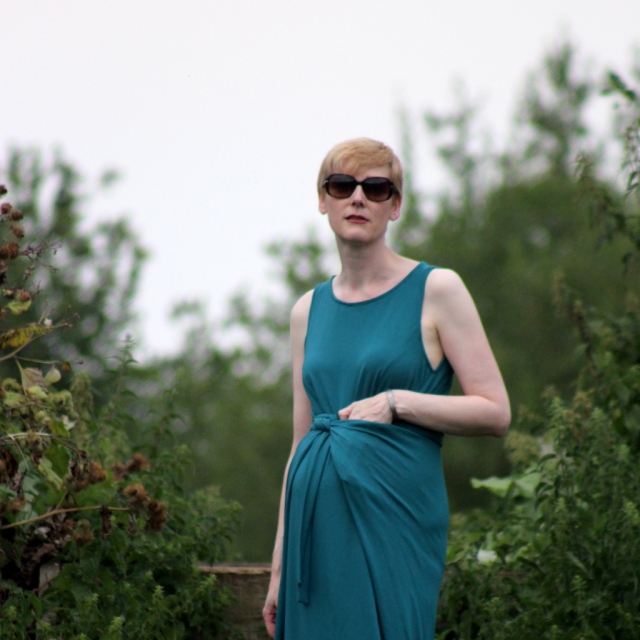 The fabric requirements given for the dress are very generous. The pattern says 205cm of 150cm wide fabric for the size I made, but I got mine out of 150cm (and because I always buy a little extra fabric to accomodate length adjustments, I now have enough over for another garment). The fabric I used is a single knit viscose-elastane blend from Tissu Fabrics. They have it in a few different colours. This one is the sea green. At the time of writing it is still available. It’s easy to sew with and has got very good drape; here’s a shot of the dress in motion.

This isn’t my best sewing. I was in a great hurry to get the dress made and ended up stretching out the neckline and armscyes when applying the binding. And I finished the hem with a very unprofessional zig-zag stitch because I didn’t want to have to wind an extra bobbin to use with a twin needle.

Despite the wrong size and the careless finishing I really like the final result. I’m tempted to make it again in a chiffon fabric to wear over a slip like the sample on the Named website. One thing that does puzzle me is that the instructions say to use a fabric with 20-60% stretch, and I’ve never encountered a chiffon with anything like that degree of stretch. I’ve seen several successful versions on other blogs in drapey non-stretch woven fabrics so I might just try regular chiffon and stick with the larger size. I’ve got a beautiful large-scale chiffon print in green, black and white that’s been lurking in the stash for years that could work for this.