Vogue 1390 has been in my pattern stash and lurking on my to-sew list for a while. I particularly like the tucked front panel of view B.

When I finally came to take the pattern out of its envelope to trace it I was surprised to find that the front panel wasn’t quite as I’d remembered it. The image I had was of fairly narrow tucks with gaps between them. In fact the fold of one tuck lies on top of the stitching line of the next and they are very wide: each tuck takes up 13.5cm of fabric leading to a finished width of 4.5cm. They are also described throughout the pattern instructions as ‘pleats’ although the envelope says ‘tucks’. After some dithering I decided to adjust the pattern to have the smaller tucks with gaps I’d imagined. This used less fabric, but meant sewing a lot more tucks.

I started out by trying to make an accurate pattern piece for my version but soon realised that turn of cloth might be a problem: if each tuck takes up even a tiny fraction more or less fabric than I had allowed for then the panel would come out much too narrow or too wide once the error had been multipled by 14 tucks. Finally I cut a centre panel piece that was as wide as I’d calculated plus quite a bit extra, and just started making tucks from the centre until I got to about the right width. My tucks take up 3cm of fabric each, with a finished width of 1cm, and have a 1cm gap between them. It was not a quick process, especially as I was trying to be extremely accurate!

The long metal ruler was a great help, not least for checking the panel wasn’t pulled off grain when I laid it down to mark each tuck.

Tucks need the foldline to be marked from the right side. I used black chalk in the hope that it wouldn’t show much if it didn’t brush off the fabric easily, but I still ended up washing the panel at the end to get all the chalk out. And the black dust made a terrible mess on my hands and the ironing board. 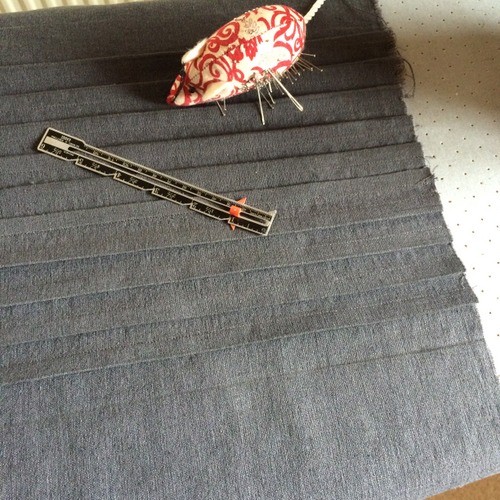 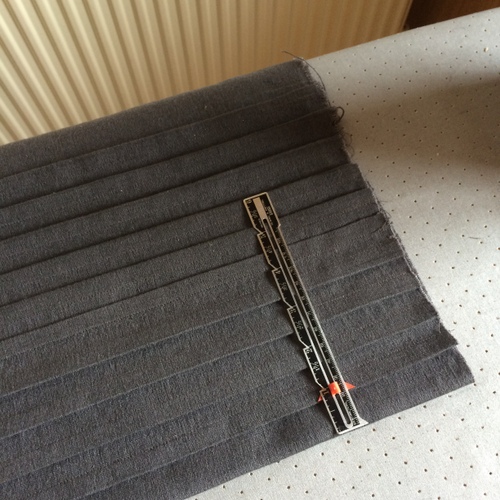 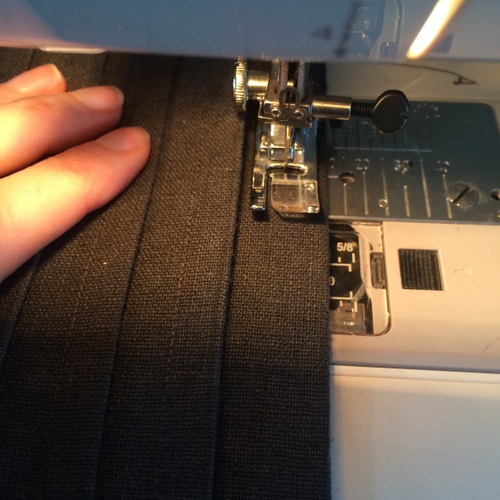 When I’d made enough tucks I laid the centre panel on top of the two panels it attaches to and compared with the lining pattern pieces to make sure I’d overlapped them at the right place to get the correct total width. Once adjusted for width I sewed on the side panels very close to the last tuck seam.

I realise now there was a good visual reason for the wider tucks in the pattern in that the width balances the untucked side panels better. But I’m committed now so we’ll see how it looks when the dress is made up. That might yet take a while. Better hope I still like the style as much when it’s finally done.