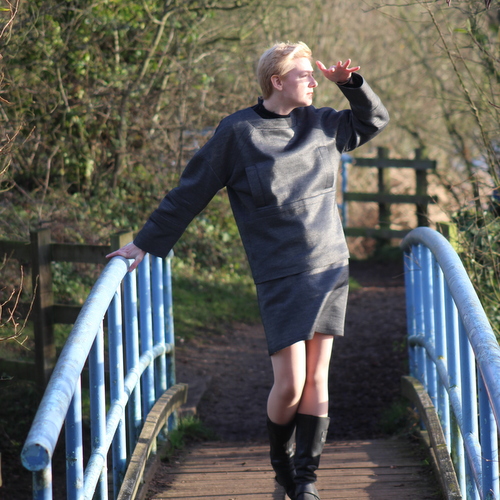 I never intended this top and skirt to be worn as a set, but I think they work together and produce a sort of 60s effect – maybe a bit Courrèges? My first thought when I looked in the mirror was ‘oh dear this is Jackie Kennedy goes into space’. I therefore decided against wearing big sunglasses for the pictures.

They’re both made from mystery silver sweater knit which I bought on Goldhawk Road some time in 2014. The new garment in this post is the skirt. I had 4m of the fabric and I made two fairly fabric hungry tops out of it, but there was just enough left after that to make the very practical skirt from Vogue 1247.

This top is quite long, which makes the skirt pockets less useful than they might otherwise be when worn together.

The pockets on this implementation of the skirt can sag a bit when you put things in them. The pattern was not intended for knits. The pockets on my woven version behave much better than this. I probably should have done something to stabilize the top edge when I made the knit one.

Despite being made in a knit this skirt still needed a zip because it’s lined in a woven – a heavy black polyester satin lining fabric which was also left over from another project. The original design isn’t meant to be lined but it’s very easy to do: cut out the skirt fronts and backs again in lining (folding the pocket bag extensions out of the way) and sew them up with tucks instead of darts, leaving a gap in the top of the centre back seam for the zip opening. I then machined the lining opening edges to the zip opening edges on the skirt shell, and then basted the shell and lining together around the top before adding the waistband. This gives a nice neat finish without any hand sewing required around the zip. I did hand sew the shell hem though; the fabric is actually a very fine silver and black stripe and a machined hem would have looked a bit odd as it would have cut across the stripes. 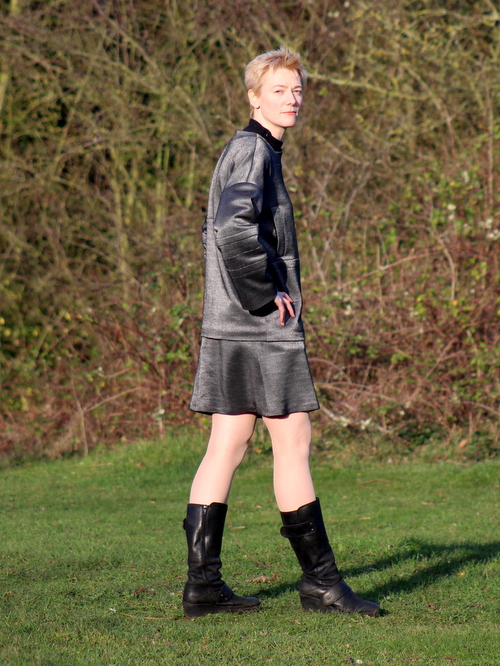 Despite the woven lining the skirt is quite drapey and shapeless in the knit. Very different from the woven version! The top in the pictures has more body than the skirt because every piece on that is interfaced. 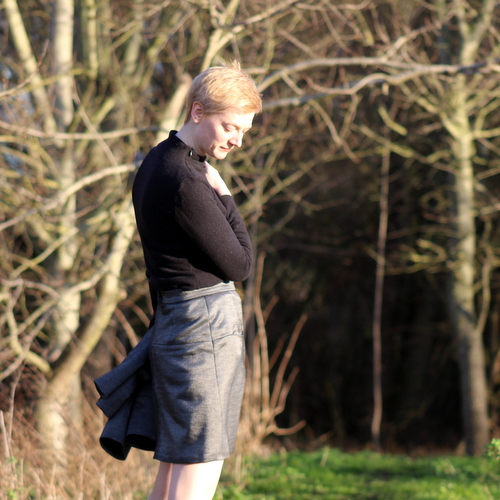 The only thing I interfaced on the skirt was the waistband. If I was doing this over again I’d definitely interface the whole skirt but it’s perfectly wearable as it is. I made it a month or two ago and it’s been in fairly regular rotation for work. I normally wear it with the black polo neck jumper in the picture above which is an old make loosely based on Burda 122-04-2011.

Thanks as ever to my husband for taking the pictures!