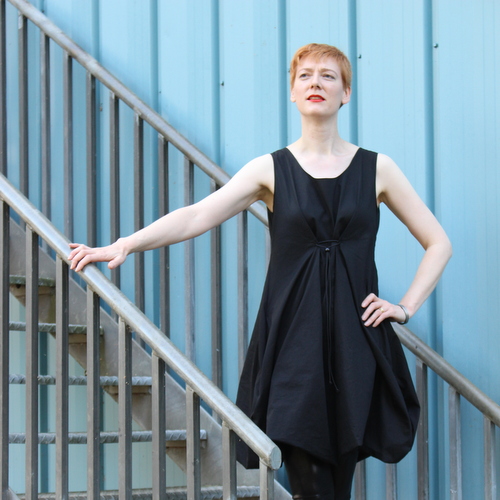 This is Vogue 1410, a Lynn Mizono pattern described by McCalls themselves as Art-Teacher Chic. I normally aim more for futuristic than artistic, but the adjustable length and drawstring detail in this one really appealed to me so I bought it in the last pattern sale.

Here’s the original for comparison. The only pictures I’ve been able to find of it online are the Vogue envelope art – anyone seen it elsewhere?

I didn’t want to look too much like I knit my own yoghurt (rampant hypocrisy from someone who makes their own clothes I know), so I made this up in black and am wearing it with a pair of wet-look leggings from Topshop which hopefully don’t look too ridiculous.

The suggested fabrics list on the pattern envelope covers quite a range: Stretch Poplin, Seersucker, Silk Dupioni, Lt.Wt. Wool Crepe. That seems to run the gamut from very stiff (dupioni) to very drapey indeed (crepe). I wanted the skirt to have an exaggerated shape so I went for a cotton poplin from Tissu Fabrics. It has 4% lycra which I thought might help with the inevitable creasing you get with cotton but it didn’t. All these pictures were taken after wearing the dress all day so creases abound. 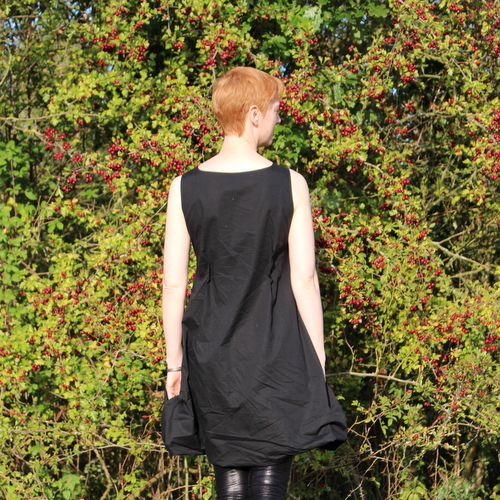 The neckline on this dress is really wide. I don’t normally have to adjust that for Vogue patterns, but I wish I had brought it in a little on this one. You can see it gapping in the side view below. I notice that in one of the envelope pictures the shoulder of the dress is falling down the model’s arm, so I presume it’s meant to be like that. The neckline and armscyes are finished with a narrow hem. Another time I would probably change this to binding because I always find binding has the effect of drawing an edge in, whereas narrow hems tend to stretch it out even more.

Having said that I’m pretty pleased with the way the narrow hems came out this time. I’ve never had a lot of success with those in the past. I used the method where you sew a line of stitching close to the edge, crease and press along that line, and then turn the edge up once more over that, press, and stitch. The pattern suggested something slightly different but I find this one works best for me. 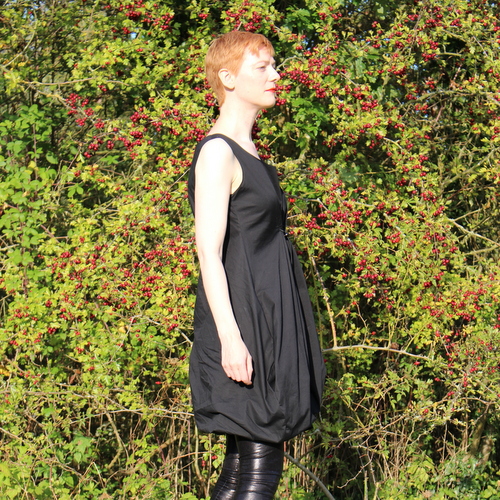 The dress length is adjustable. There are buttonholes in the seam allowances at the end of the side seams, and three pairs of buttons sewn into the side seams on the inside of the dress so you can loop the hem up to different heights. Above I’m wearing the dress with the hem buttoned to the middle pair of buttons. The shortest length is too short on me, and the second longest one isn’t particularly flattering so no pictures of those. But here it is unbuttoned completely. I doubt I’ll wear it like this much, but it makes an interesting shape. 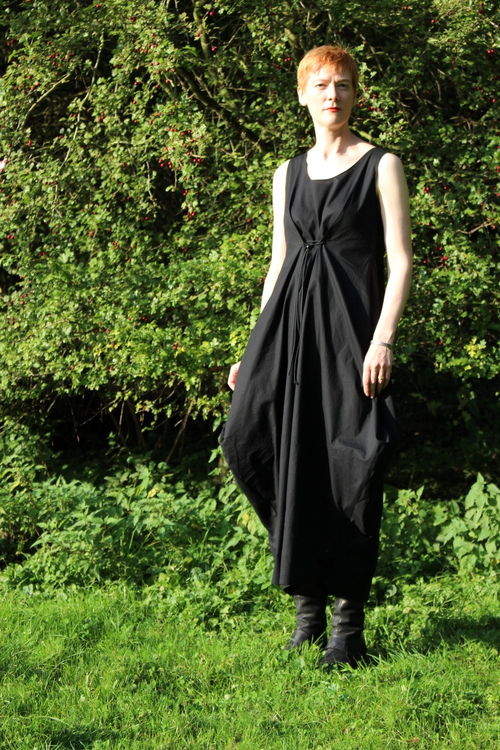 The back shaping is unusual. You sew a pair of very square pleats on the outside of the dress front and back. The front ones get pulled in by the drawstring, but the back ones stick out like fins. A few people who have made this have stitched the back pleats down to the dress, which looks nice, but I’ve left mine sticking out. I interfaced both the front and back pleats to make them good and sharp. 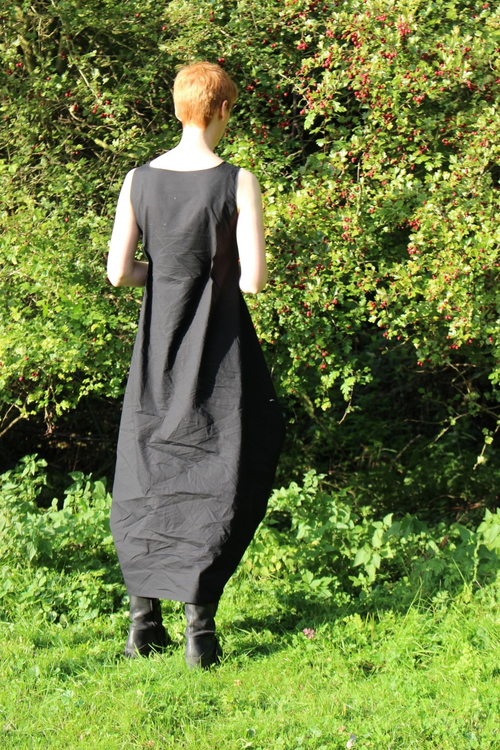 I added side seam pockets. They ended up a bit low because I didn’t want to interfere with the button placement; they’re where that big shadow is in the picture below. The dress is french seamed throughout so I had to find out how to do french seamed pockets. This tutorial from Deborah Moebes was very helpful.

This is a seriously quick sew. Even with the french seams and adding pockets I managed to make this in a day.

So, the final question: is it art teacher or urban warrior? Or a bit of both? 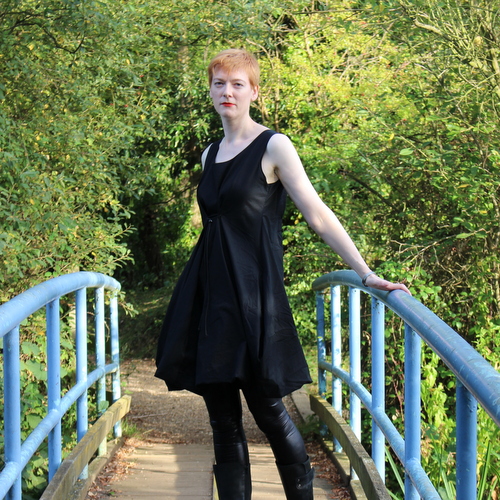