Since I started cycling to work I’ve been wearing fewer dresses and more trousers. I made a couple of pairs of jeans earlier this year to fill in the trouser-shaped hole in my wardrobe. What I didn’t make were any new tops to go with them. My one jumper has been worn so much it has gone into holes.

So last time I was in London I got some fabric to make another version of the jumper. The original was just a basic boat neck t-shirt pattern made up in black wool jersey. It was originally based on McCalls 2401 but it’s evolved so there’s only the faintest resemblance nowawdays. I wanted a high neck for this one so I took Burda 122-04-2011 and traced its neckline onto my t-shirt pattern.

The fabric is a wool-elastane doubleknit. It’s wonderfully thick and springy. I was worried at first that it might be a little too shiny because it had a very smooth face when I bought it, but a trip through the washing machine changed the texture to be slightly fuzzier. It came from Cloth House on Berwick Street. I started out a universal size 90 needle but got lots of skipped stitches which no amount of fiddling with tension cured. After switching to a stretch needle results were greatly improved as you can see below. The top line of stitching uses the stretch needle and the other two are the universal with differing tensions.

So here are the final results. The neckline on this top is perfect. It’s high enough to keep me warm while cycling but it doesn’t annoy me. I’m less convinced by Burda’s combining the high neck with short sleeves. I once had a sleeveless top like that which worked well with a pencil shirt or slim trousers though.

It’s very hard to see the zip in the shoulder in these photos, but if you’ve spotted it in the closeup below: yes I put it on the wrong side. Having got it to go in pretty much perfectly there was no way I was going to unpick it when I realised. I pointed it out to a friend and she had to think for a moment about what side it ‘ought’ to go on in the first place, so I don’t think anyone’s going to notice. I can’t just turn the top around and have the zip on the left because the neck facings are very different, even though the front and back body pattern pieces are much the same. The back neck facing is longer and would bunch up awkwardly if put at the front.

The back is completely plain but it is nice and long. It’s not hemmed. I didn’t have quite enough fabric for the length I wanted and it doesn’t fray so I just cut the hem edge carefully with a rotary cutter and left it raw. 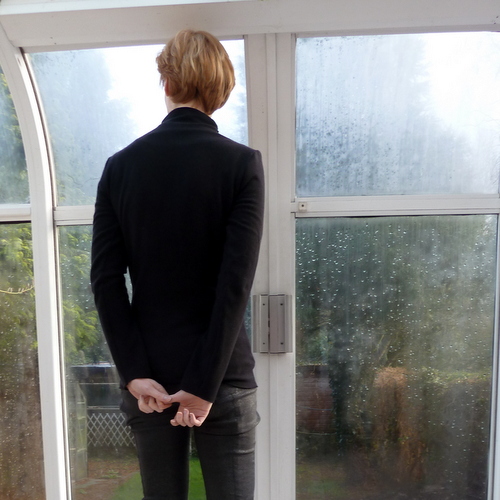 One more picture because I like this one, although it doesn’t show anything new. This frankenpattern is definitely a keeper.