I always look forward to the autumn and winter Vogue pattern releases. Sadly the autumn collection was underwhelming this year. The winter one came out in the US a couple of weeks ago and the good news is that it’s a definite step up.

The designer patterns are few but good. I’m disappointed there’s no Chado Ralph Rucci (again!) but what we do get is what Vogue designer patterns are all about: styles with unusual details or dramatic impact. My favourite is the Donna Karan pattern for leggings and a wrap top. I’m posting the technical drawing rather than the photograph because the whole point of this one is the seam detail in the leggings.

Another highlight is the spectacular evening gown from Badgley Mischka. If I had a glamorous evening event to go to, this pattern would definitely be on my shopping list. The pattern description also hints at some interesting techniques: ‘back pleated drape with weighted tab’. You don’t often get that sort of thing in Burda.

There’s also a selection of little dresses with interesting details: a cape overlay, a pleated bodice, contrast inserts and the like.

The most unusual designer pattern this time around is a top and skirt from Guy Laroche. I really like this one, and not just because it has pockets. I’m not sure how flattering it would be on a non-model but I bet it’s an interesting sew. 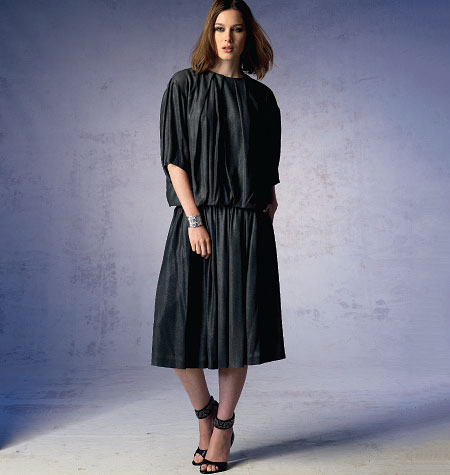 Very Easy Vogue has some hits. There’s a classic cape and a simple and pretty colour blocked dress – although given that this is the Winter collections, sleeves would have been nice. But I’m being a bit picky there because we also have 8495 (shown below) which not only has sleeves, but interesting ones.

Also in Very Easy Vogue there’s a simple overcoat with a slightly unusual draped detail at the back. But it’s not all good: there’s also this. 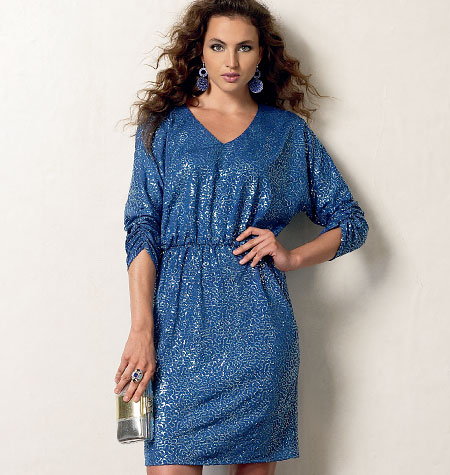 The undisguised elasticated waist would be fine if the dress had been made up in a really casual fabric. But with the sequins it just looks odd. OK pattern but poor fabric choice perhaps.

Speaking of belts, there’s something odd going on with the waist on the custom cup size pattern. This is a closefitting dress with a lot of seam detail at the waist. The model’s wearing a purchased belt in the full length pictures, but in the belt-free closeup you can see the intersecting seamlines haven’t matched up on the dress. It could be a sewing failure rather than the fault of the pattern, but I’d certainly look out for some reviews before buying this one.

The rest of the Very Easy patterns are knit tops, mostly with mullet hems. Nothing in there you couldn’t find elsewhere. The hoodie top is the best of them. It seems to have more waist shaping than is typical – at least in the model shots – and you could easily remove the mullet.

The Easy Options patterns are good as always. We get two dresses: a French darted style with a waist seam and a princess seamed style without a waist seam. As usual they come with a selection of neckline and skirt shape variations. Rather than just the obvious ‘pencil skirt version’, ‘A-line skirt version’ variations there’s a peplum option on the first and a mermaid skirt on the second.

The third Easy Options is a skirt, and probably my favourite style out of the whole collection: 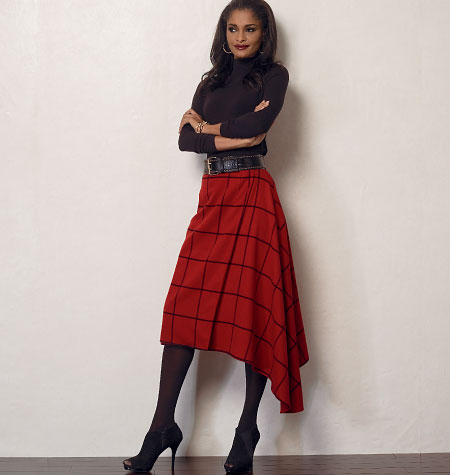 This is so Vivienne Westwood. There’s also a pencil skirt variation in there, and one with the drape on both sides. Even better, it’s rated Easy. I’d have loved for this to have been available when I first began sewing; so many of the more unsuual styles were beyond my reach at the start.

The regular Vogue patterns are a mixed bag. There’s a lot of eveningwear but also some more casual styles. I’ll just pick out two: 8955 because I love the drama of palazzo pants: 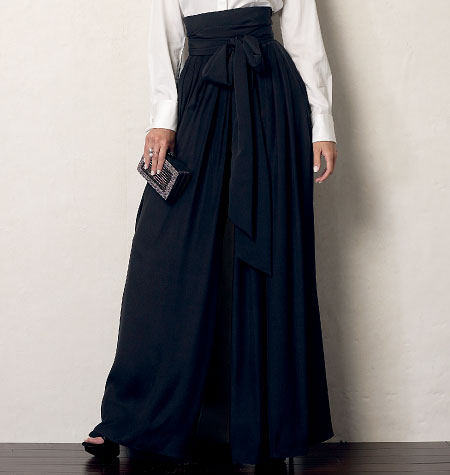 And 8946 because it’s oddly like a maternity style, and I don’t mean that in a bad way. There aren’t a lot of maternity patterns out there, and although this isn’t intended to be one, it looks as if it could accommodate a small bump.

But the most important question is: will I actually buy any of these? And the answer is that I won’t be rushing to get them the day they come out in the UK, but a few are going on my Christmas list. And that’s a definite improvement.

What do you think? Love this release or bored by it?