Anyone who’s been reading this blog for a while knows I have a strange love for shiny trousers. But I don’t wear trousers a whole lot so up until now I’ve only made one shiny pair, which gradually shrunk in the wash until I could no longer do them up. Now I’m needing some cycle-friendly clothes (thanks for all the pattern and blog suggestions!) I thought that recreating the shrunken shiny pair would be a good place to start. The pattern I used is the same as before, Burda 103B-07-2010. This is a skinny jeans style with an extra seam down the back of the leg. I made them up in a silver stretch denim from Minerva Crafts.

The fabric was originally much more silver in colour, but a trip through the washing machine removed a lot of the coating and left this sparkly black effect. This is no reflection on Minerva, I’m pretty sure they said it wasn’t washable when I bought it.

Here’s the back view. I added patch pockets because I think trousers can look a bit odd without some sort of detail on the backside. Or is that just me? I also made the legs extra long, which is in part what’s causing all those wrinkles on the leg. It’s bad fitting but I like the effect. 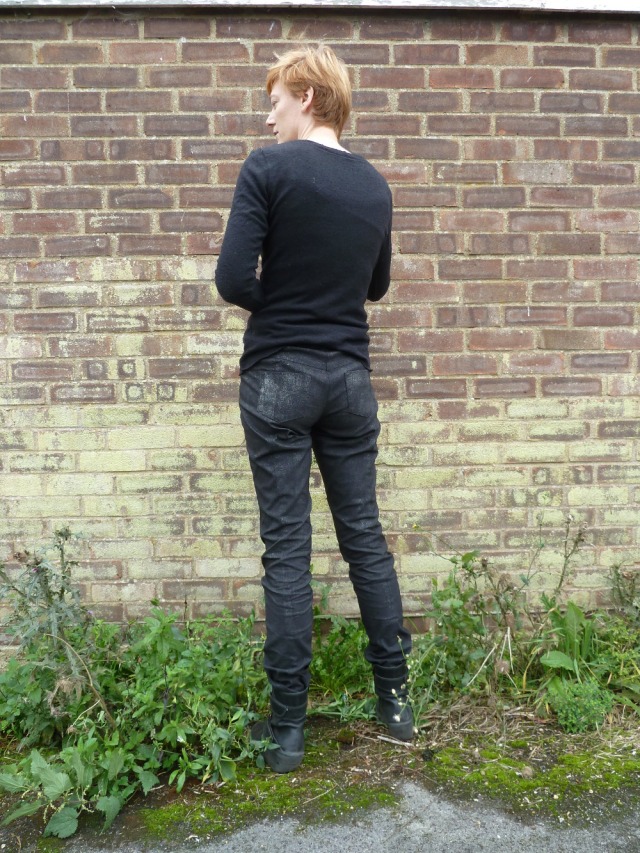 However there’s definitely some extra fabric pooling under the bum that can’t be explained by the longer legs. According to the fitting books this means the back crotch length is too long – or as they generally put it, a flat bum adjustment is needed. I could probably fix that on this pair as it just means sewing the crotch seam a bit deeper, but it isn’t bothering me and I’d rather not unpick the topstitching.

So why are they the deadly jeans? They killed my sewing machine. It jammed really badly while sewing a test buttonhole. It was the sort of jam where you have to get your scissors out and cut everything you can reach. And while hacking out all the snarls I must have damaged something. It wouldn’t pick up the bobbin thread when I rethreaded it, and when I took the needle plate off it was pretty obvious why: the hook timing is now completely off. I’m lucky enough to have a second machine so I was able to finish the trousers and I’ll be able to sew while my main one is repaired. Which is a good thing because I have another pair of these cut out!