First of all, thanks for all the insightful comments on my sack-like dress. I’ve worn it out of the house a couple more times since the photos were taken, and I’ve decided to keep it as it is rather than trying to make it match the original or even give up and recycle the fabric. Although now I’ve seen MaciNic, Lisa, and The Perfect Nose‘s versions I’m tempted to try the pattern again in a more suitable fabric one day.

Oh and for those who asked about my shoes, they are Melissa; that particular style’s been discontinued but there’s still plenty of plastic goodness on their UK site at http://www.nonnon.co.uk/. Not that I just had a quick browse while checking the URL or anything.

But on to what is normally my favourite pattern collection of the year; the autumn Vogue release. They are only on the US site at the time of writing. And while it’s an improvement over the 2013 spring and summer releases, I’m still a little underwhelmed.

First things first: one thing I really approve of in this collection is the photography. No wacky poses this time round (remember Spring and Autumn 2012?). This time every style is simply photographed front, back, and both sides, and often there’s also a closeup of an interesting detail. There are more photos overall than I remember in previous collections, and in many cases at least one of the pattern variations has been photographed too.

The designer patterns just aren’t grabbing me this time around. The two Donna Karan designs are the best of the bunch: Vogue 1361 is an interesting day dress and 1365 a useful coat. But the more I look at the dress, the more I think I’d be tugging at it all day long to make it lie correctly.

1362 isn’t for me but it’s what Vogue designer patterns are all about: a strikingly unusual style that I wouldn’t want to try to draft myself. 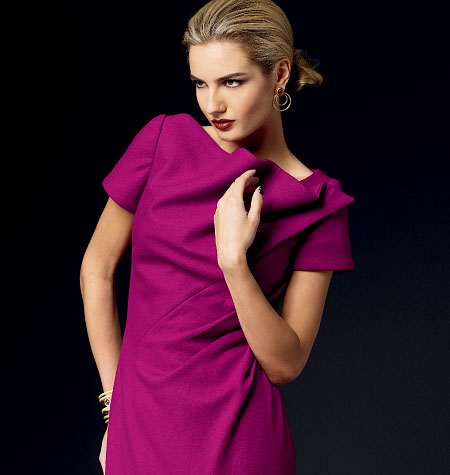 The others are all things I think I could easily find versions of in Burda. Take 1363 for example. Possibly I’m missing something here? Nothing wrong with it, but if I’m going to be paying Vogue designer prices (eye-watering in the UK and they’re never less than half price even in sales) I want a pattern with wow factor or some unusual detail, and this isn’t it.

The non-designer patterns have much more interest. I’m not a jacket wearer myself, but there is a trio of jacket patterns with clean, unfussy lines that are tempting me: 8932, 8931 and 8937 (below).

Very Easy Vogue has some great simple patterns with a twist. 8926 is a stylish casual jacket (if you click through be sure to look at the tech drawing and not just the photos) and 8925 is a simple princess seamed top that could be used in lots of ways. Although I can’t decide if 8919 (below) has been murdered by horrible fabric choice or whether the seam lines are just in a bad place.

The Custom Fit pattern 8936 is for a peplum top with skirt and trousers. I am not a fan of the peplum, and the fake leather Vogue chose to make this up in isn’t helping, but I think the proportions on this one are fundamentally really good. I’d like to see it in a different fabric. 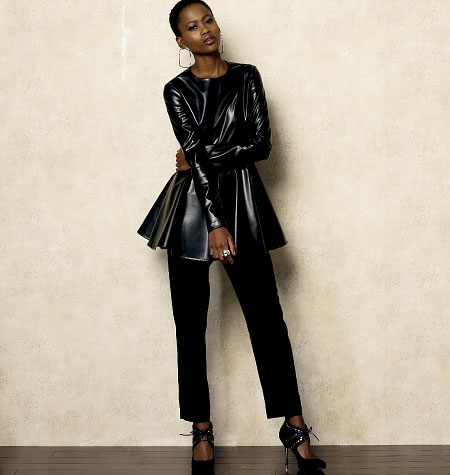 There are three Easy Options patterns: 8927, a set of blouses, 8928, a set of skirts which while an interesting basic pattern don’t offer a lot of variation, and 8936, a colour-block dress that’s probably my favourite item in the whole collection.

It’s also good to see another pattern for men: 8940 is a man’s coat and trousers.

So on the whole there’s a quite lot to like this time around, but the collection as a whole doesn’t rise to the heights I expect of Vogue. Things are definitely improving though; I’m looking forward to the Winter release!

What did you think? Am I missing something about the designer pattern? Would you wear the red Donna Karan? And can that peplum be saved?