A while ago I made a a very simple kimono style jacket. At about the same time I came across this far from simple free download Alexander McQueen pattern which is also for a kimono jacket. I said I’d give it a try and here are the results.

Back view first, as that’s where all the elaborate pleating is. 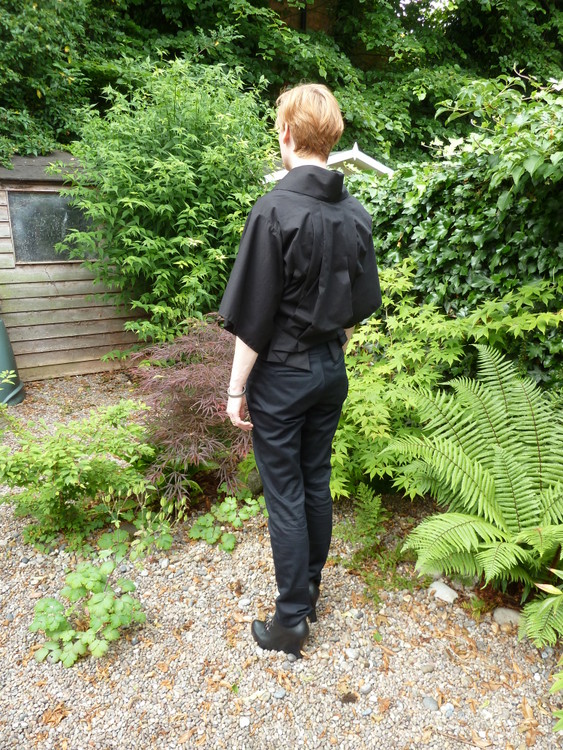 The front’s a lot simpler by comparison although I still spent some time figuring out how to fold the pleats at the bust dart.

I made this out of black cotton poplin from Minerva Crafts. It’s 115cm wide and I used about 4m. I didn’t make much effort to lay the pattern pieces out efficiently so that’s an upper limit. Cutting it out was tricky as the body pattern pieces are huge and require a lot of marking. I did what felt like hundreds of tailor tacks to mark the pleats on the first body piece. I couldn’t face doing the same on the mirror image piece so I drew over the tacks on the first piece in chalk, dropped it on its unmarked twin and pressed down. Enough chalk transferred to the second piece to show the markings, although they needed going over again with the chalk wheel.

You can just about see where I lengthened the pattern by my usual 5cm. That was probably a little too much. The pattern is one size only, I’d say about a Big Four size 10. By the way, it doesn’t say this anywhere on the pattern but the seam allowances seem to be 1cm. 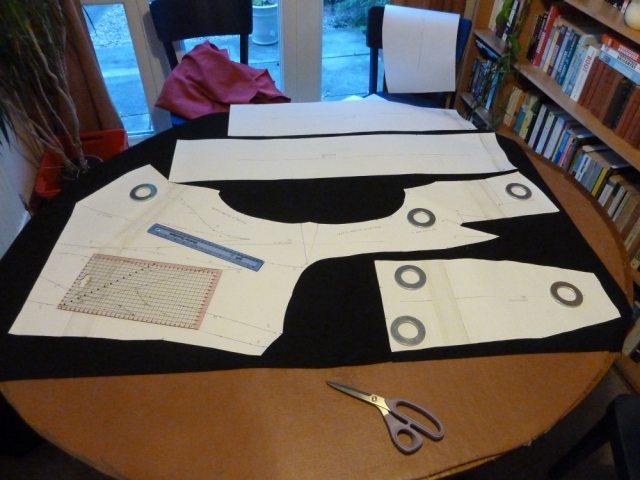 The original pattern had no instructions. However it must have been been updated since it first came out because inside the zip file you download are a set of contributed instructions which were absolutely invaluable. I’m not sure I understood them all because I ran into some problems, but I’d have really struggled to put this together without them. The issue I had was that in a couple of places I ended up with pleats sewn completely shut. When I compared with the original garment this clearly wasn’t right; the point of this style is the volume and folds you get by leaving the pleats open other than at the top and bottom. Anyway I ended up ripping a few stages out to allow the pleats to billow out. I also added a few bits of stitching that weren’t mentioned, mostly to hold the pleats in place at the hem. Here’s a closeup of what I ended up with. 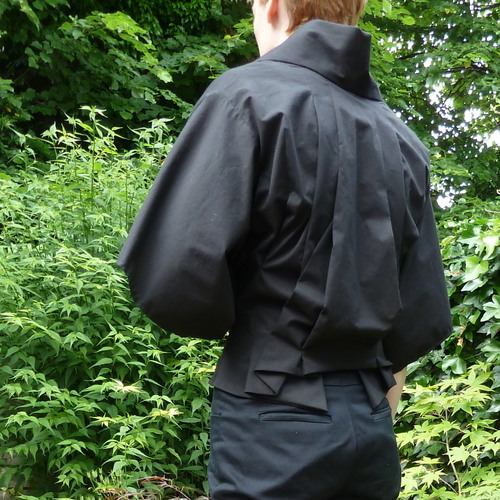 The pattern doesn’t mention anything about interfacing. I interfaced the collar and back hem facing which I think was the right decision. The hem really benefits from a bit of firmness. There’s also no mention of lining. I presume the original design was lined; I’ve certainly seen a very similar Alexander McQueen jacket on Net-a-Porter with lining. However there was no way I was going to try to draft a lining for this little experiment, so I’ve just overlocked the visible seam allowances.

So what’s it like to wear? It certainly catches the eye, but it’s quite comfortable. I appreciate the fact that you don’t need to wear anything else fancy with it. I made these black trousers in part to go with it, but my black skinny jeans would have been fine. Obviously these shoes are just for posing purposes!

I doubt I’ll ever make this again. But it was a fascinating project and the end result’s surprisingly good considering how little I understood how the pleating works. I have actually worn it out of the house; that’s definitely a success.