Thanks so much for all the really positive feedback about my colour-blocked dress. It’s definitely growing on me but I think the solid versions of that pattern are still my favourites. I have my planned stripey version cut out now, so it’ll be interesting to see how that turns out by comparison.

I don’t know about you, but while I can sew by artifical light I really need daylight for cutting out fabric. And the nights in the UK are really drawing in so the only chance I get to cut out is at the weekend now. And as making enough room to cut out fabric involves rearranging the entire living room, I thought I’d try cutting out more than one thing for a change. 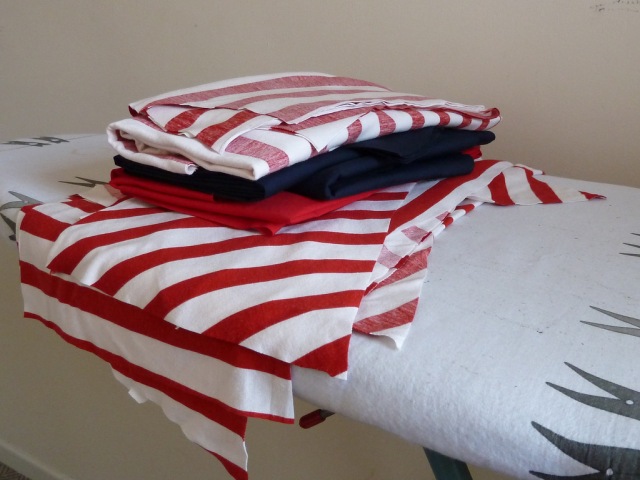 That’s four dresses, all of which I’ve made before. Burda 116-08-2011 in red and again in navy, a stripey Vogue 1250, and the stripey version of the colour-blocked dress, which is Burda 117-02-2012. I normally only cut one garment at a time because my cut fabric pieces either crease horribly or go missing as soon as I turn my back on them. All of these projects are quick enough that the pieces won’t be hanging around for long enough for anything bad to happen; that’s the plan anyway.