Isn’t the Internet amazing? I thought I’d ruined my white cotton drill fabric but Sewing Elle and The Perfect Nose came along with some advice that resurrected it. It’s now cut out and interfaced. And Clare S nominated this blog for the Leibster Blog Award. Thank-you so much, all of you! I’m going to have to give some serious thought to picking five other blogs to pass the award on to; there are so many great blogs out there.

So what have I been up to? Finishing Burda 117A-02-2012, a knit dress from the February Burda that is proving extremely popular in the sewing blogosphere. In the magazine it was shown as both a colour-block and plain version. I’ve seen two great colour-block versions from FehrTrade and SewTawdry but I went with the plain black version on the grounds that I wanted the exposed back zip to be the main feature of my dress. Consequently you can see absolutely none of the pattern’s many seamlines in the photos. But rest assured, they are there. I traced all those lines, added seam allowances, and then matched them all up. And they do match. Honest. 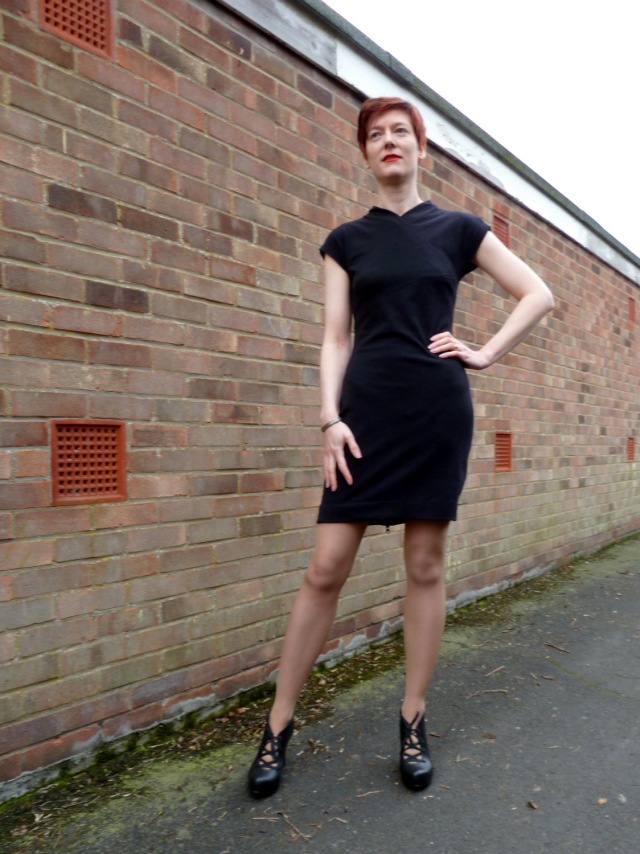 The back zip is what really makes this version. I got it from Klein’s in London. My zip isn’t actually functional. The fabric is stretchy enough that I can pull the dress on over my head, and I feel a lot safer from wardrobe malfunctions knowing that centre back seam is sewn firmly shut. I also really like the cap sleeves. You can’t see it in the pictures but there’s a small pleat at the top which gives them a nice curvy shape.

This got made to the accompaniment of the Blade Runner soundtrack and I was hoping it would come out a little bit cyberpunk, but I’m not sure it really has. Maybe if I add mirrorshades?

22 thoughts on “Not quite Blade Runner”