Thank-you all so much for the nice comments on my last post about Vogue 1220. I can report it stands up to wearing at work pretty well.

What I’m doing at the moment is making a kimono for my mother. I’ve made kimonos before. The one the one I posted about last year was made from a patterned fabric but I made no effort to match the pattern or worry about which way up it went, and the other couple I’ve done were solid colours. My mother has picked some lovely dark blue and gold Chinese-style brocade with dragons on it and I decided to put some effort into laying it out to best effect.

Here’s the fabric design. I’ve darkened the picture so that the design shows more clearly, but the base colour is really a midnight blue rather than black. The medallion-like motifs are about three inches across and turn out to be curled-up dragons when you look closely, so the whole design is made of dragons and little clouds.

Warning: geekery ahead. At first sight the design looks as if it has a fairly small pattern repeat, something like the cell I’ve drawn below. I assumed the design was ‘one-way’ and had a good look at the curled-up dragons to see which way up they should be placed. 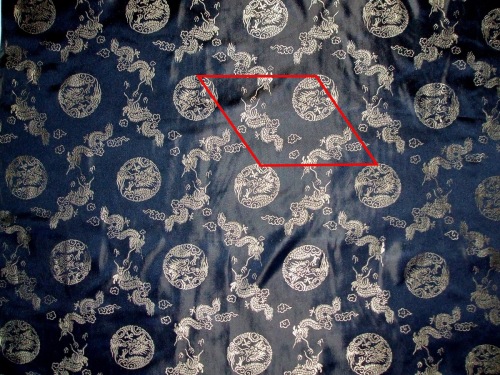 But when I looked more closely I saw that half the curled-up dragons are upside down. The pattern repeat is twice as large as I thought. Whichever way up the fabric is used, half of all the dragons will be upside-down. I’ve drawn the real pattern repeat below. It’s actually rectangular but I must have taken the original picture on the skew. 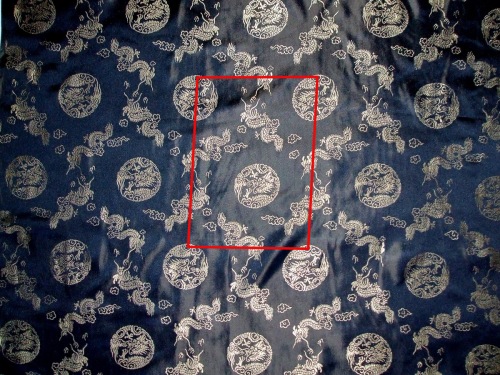 At this point I thought that the design had two-fold rotational symmetry – in other words you could turn it upside-down and it wouldn’t make a difference – and I started trying to figure out its wallpaper group. It’s possible to classify 2D repeating patterns, such as those on wallpaper and fabric, into exactly seventeen distinct types. I thought I had one of the five types with two-fold rotations. Once you know what rotations there are you start looking for reflections to narrow it down to the exact type. There clearly aren’t any ordinary reflections in the pattern, so I started looking for glide reflections. Then I spotted the clouds. Have a look at the two I’ve circled below, which are next to what appear to be otherwise identical (apart from rotation) dragon motifs. The two clouds are different! The smaller cloud only appears in one orientation within the design, so it is a one-way pattern after all. It’s the simplest of the wallpaper groups, called p1. Once I started looking for it I found a few of the other cloud-like motifs were strictly one-way as well.

It still doesn’t really matter which way up this particular design is placed as long as it is consistent. I put the centre back on one of the vertical lines of medallions, and then tried to lay the rest out so that the pattern matches at the side and sleeve seams as well as possible. I don’t think I’ve done a completely perfect job on the matching, but the fronts and back will demonstrably be the same way up even if you have to squint at the small clouds to tell. I would never have noticed something like that before I started sewing. I’d like to find some wearable fabrics with more elbaorate wallpaper groups.

6 thoughts on “Upside down dragons – patterned fabric and symmetry”