My sewing machine’s not happy. The tension’s been slightly off for a long time, but recently it’s got a lot worse. For a long time I thought the problem was the needle tension, which I keep having to turn up higher to get even stitches. But this week the bobbin started rattling and sticking. The thread broke. And every so often, the bobbin tension went really tight and everything jammed until the scissors came out.

I guess it really needs a good service. Obviously there comes a point where faithfully cleaning it after every project and changing the needle just isn’t enough!

I think the problem might be something to do with the bobbin holder. 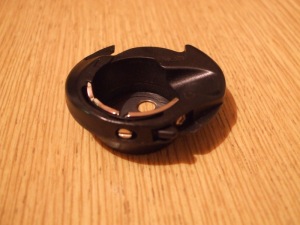 See that tiny little screw at the front? You aren’t supposed to adjust it, but according to the Internet it controls the bobbin thread tension. The machine was behaving so badly on Monday I gave it a tiny tweak to loosen the tension, and that helped. It’s not as good as new but it hasn’t jammed since. I’m hoping this will be enough to keep me sewing through the Christmas break. I will get it serviced after the holidays. Honest.