Do you notice which way a wrap dress wraps? As you’ve probably guessed, I have managed to cut out my wrap dress the wrong way up so it’s going to wrap left over right instead of right over left. I thought I was being clever by cutting it out with the wrong side of the fabric up. The idea was that it would then be easy to mark the darts onto the wrong side of the fabric with chalk as I wouldn’t need to turn the fabric over. This fabric is slippery and creases as soon as you look at it so the less handling it gets the better. Then I forgot to flip the pattern pieces as well as the fabric and didn’t notice until it was too late.

Personally I don’t think this is the end of the world – I had to think a bit to work out which way round women’s clothes normally do wrap in the first place. In addition, the fabric I’m using makes the detail of the pattern almost invisible. 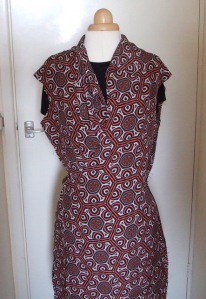 I guess this is something most sewists manage to do at some point or another. I shall finish the dress and see if I notice it’s ‘wrong’ when I’m wearing it.

6 thoughts on “Do you notice which way a wrap dress wraps?”