Do you know where your towel is? Or your tape measure, or your scissors? Is it just me who spends a large amount of my sewing time searching for the pins I know I had a moment ago but managed to put down somewhere on the other side of the room? (In case anyone’s wondering, the towel is a substitute for a pressing ham. It also makes a handy sleeve roll when wrapped around a rolled up copy of Burda.)

This week’s been particularly bad for losing notions because I’ve added hand-sewing needles and basting thread to the usual pile of things to keep track of. The dress I’m sewing has a lot of curved pintucks which need thread tracing. (Eight down, another six to go). However this little guy, a present from my friend Jane, has come into his own lately. At first sight he’s just a handy pincushion.

But pull his tail and he’s a retractable tape measure too! 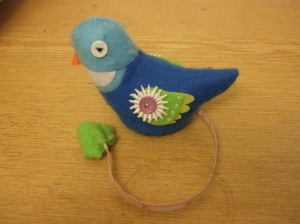 Brilliant. The retractable tape measure is much easier to use for small things than my regular one, and I haven’t lost any of my needles yet. He even hangs onto basting threads because they stick to the felt. Now I just need a pair of scissors with a homing device built in. Thanks Jane!

2 thoughts on “Knowing where your towel is”