Buttons are my nemesis. Give me a dress with a zip any day. I’ve never managed to get my sewing machine to make good buttonholes, and I can’t sew a button on in such a way that it stays put for more than a few days. So I clearly wasn’t going to make Vogue 1220, the recent Donna Karan shirtdress pattern. And then I saw Allison’s version. And all the positive reviews on Pattern Review, and I weakened. The buttons on the style are concealed, so I figured it wouldn’t matter if I made a mess of the buttonholes.

This dress has a separate placket that you make the buttonholes in and then sew on. I made a second placket, and started practicing making buttonholes. It took me about six goes just to get the positioning right. But it was worth it in the end – the final placket is actually fit to be seen! No one will see it, of course, but I’ll know it’s there. 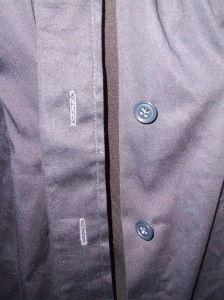 I don’t know if the buttons are going to stay on though. I sewed them on while coming home on the bus on Friday because I was determined to get the dress finished for the weekend so they may be even worse than usual. 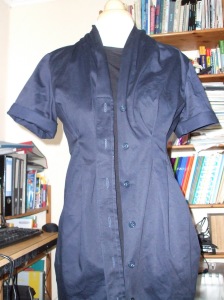 5 thoughts on “Defeating the button nemesis”