Thanks for all the lovely comments about the final version of Vogue 8633. I wore it to work this week and it’s definitely my favourite dress.

So here’s what’s next up on the project list:

I am in two minds about this dress. I love the picture. But I fear that what I love about the picture may be the fact that it seems to have been shot in the BBC gravel pit. For those who didn’t grow up in the UK in the 70s and 80s, the BBC made a lot of science fiction series on the cheap. They often used nearby clay pits or gravel pits for shooting scenes set on alien planets. The gravel pits turn up in so many stories that there is an urban legend that one day Doctor Who and his companions were fleeing from the Daleks in a gravel pit and bumped into Blake’s Seven running from the Federation.

Anyway, I have bought the fabric for the dress now so I’m going to have a go at it despite the doubts. I am certainly not using real leather in the side panels though. I lucked out and got a remnant of silvery grey pleather from the Cloth House on Berwick Street a couple of months ago. This pic is actually of the cutting scraps; it’s very hard to photograph. 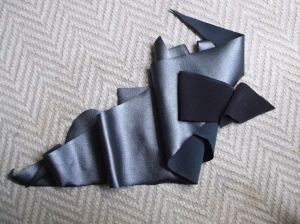 I’ve heard pleather sticks to itself and is a pain in the neck to sew. This stuff doesn’t seem sticky though, so hopefully I’ll get away without having to get a teflon foot.