As I mentioned before, it took me most of a day to cut out Vogue 1239. It’s a complicated pattern with a lot of pieces, but at least part of the problem is that I am really slow at cutting. My usual method for a big pattern is to put up both leaves of the dining table and cut on that, weighing my pattern and fabric down with food cans. This involves moving all the houseplants into the garden and rearranging the living room to find space for the dining chairs but there’s not a lot I can do about that.

The main thing slowing me down that I can actually do something about is that I find the food cans get in my way, so I have to keep rearranging them to avoid bumping my hands into them while cutting. A while ago someone (I wish I could remember who so I could link to them) mentioned on their blog that they use large washers as pattern weights, which would solve that problem nicely.

So today I went to the hardware store and had a look. Washers are not on display so I had to ask for them. They showed me some tiny little steel things. I tried to explain what I wanted them for, but obviously failed because then they offered me rubber ones. I eventually asked to see the biggest metal ones they had. They produced these, which are 7cm across, and then looked very surprised when I bought them. I realised afterwards they must have just heard ‘dressmaking’ and have been thinking I wanted to sew them to something! No wonder they looked rather dubious. 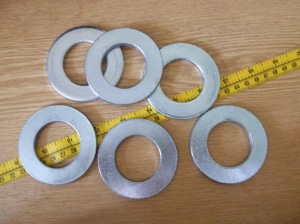 I think these will be a big improvement over food cans.