I’ve still not done any sewing. But I have acquired some new patterns, despite already having about four projects lined up. It seems I can’t resist 1970s Simplicity patterns. It’s something about the envelope art.

First up is a maxi dress. I never used to like these, but since I made one last year I am in love with them. I think the reason I never used to like them is that I am pretty tall, so hems on RTW maxis would hit me well above the ankle. If I make my own they can be as long as I like, although I found out the hard way that floor-sweeping hems are not the best thing for going up and down stairs in!

I really like the big collar option on this one, and unlike my first one it’s not backless so I could wear it for work. I’m not sure what colours to make it in though. The white collar on the envelope looks good, but I wonder if it would work if I made the whole dress, including the collar, in a bright solid. 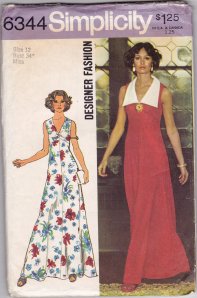 The next one also has a contrast collar. I bought this for the dress rather than the tunic and trousers. I’m not keen on the print on the envelope picture but I know there’s a really great dress hiding in there somewhere. Again I am not sure about what colours to use. Both this one and the one above are from ZipZapKap.

Finally, I found this jumpsuit pattern that I’ve wanted for a while, and in my size too! I might also make the dress, although I have to say I don’t go a bundle on the poncho (although yes, I am the same woman who made the space curtains top). I’m seeing this one in bright orange rather than the coral shade on the envelope.

This pattern was from LovelyLove Patterns.

So many patterns, so little time!