Before Christmas I decided I’d have to sew from my stash over the break as I wasn’t going to be able to do any fabric shopping. One of the stranger pieces of fabric I’ve got stored is a couple of yards of neoprene. This was bought on impulse while shopping on Goldhawk Road last year, despite having no idea how to sew it or what to make out of it. When I got it home I googled and discovered that sewing neoprene is not for the faint of heart. You need a really powerful machine and most home sewing machines aren’t up to it. I’ve seen people recommend all sorts of different needles and techniques, and the only thing they all agree on is that it’s difficult and you need to experiment a lot to find what, if anything, works for your machine. So the neoprene sat in the bottom of the wardrobe, taking up rather a lot of space, while I tackled less ambitious projects.

I got a walking foot for Christmas which is supposed to make sewing tricky fabrics easier, so now was clearly the time to either tackle the neoprene or get rid of it.
Burda did a great knit skirt pattern in September 2010 with a lot of seam detail that I thought would be a good choice. After months of neglect the neoprene had developed permanent creases (I didn’t realise you mustn’t store it folded!) and so I needed something with fairly small pattern pieces in order to be able to avoid the creases when cutting. Here’s the line art for the pattern. Sadly it doesn’t seem to be one of the ones available for download from BurdaStyle. 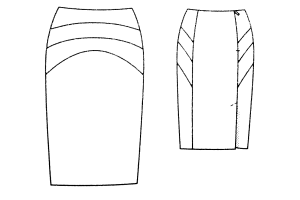 After a bit of experimentation I found that the best way to make seams was to cut the pieces with no seam allowances at all, press the cut edges up against each other, and sew a wide zigzag stitch over the top from the right side. I tried cutting one piece with seam allowance and one without and lapping them, but my machine skipped more stitches that way. Using pins across the seamline to keep the pieces together before sewing worked pretty well and didn’t seem to leave permanent marks, although I was careful not to leave them in for long. Here’s a seam pinned before sewing with a sewn one beneath it.

I tried various different needles because I’ve seen recommendations for everything from ballpoint to leather needles! I found the size of needle made more difference than the type. Larger is definitely better. My neoprene is about 2mm thick and behaved best with a size 100 jeans needle. 100 was the largest needle I had around; an even larger one might have been better. A size 100 ballpoint needle wasn’t quite as good as the jeans needle. I didn’t have any size 100 universal or leather needles to try.

The best stitch to use on my machine was the widest regular zigzag stitch, with a slightly longer stitch length than I’d normally use for a zigzag, and sewn as slowly as the machine would go without sticking. Stitch length turned out to be important. I found if I set it too short I got a lot of skipped stitches. Three step zigzag didn’t work at all because the stitches were so short half of them were skipped. I suspect things would have been even worse without the walking foot to help feed the fabric.

Finally I found I needed to set the needle tension really high, outside the normal range. My machine usually needs the tension set on the high side of normal at the best of times, but this was exceptional.

After all that I still didn’t manage to avoid skipped stitches completely but where there were obvious gaps I just sewed over the seam again. This looked fine in black thread on black neoprene. On the inside of the fabric (which is bright purple!) it looks a bit messy so I couldn’t make the skirt reversible. It would probably work better with thinner neoprene.

Pictures of the finished skirt should be coming soon, I’m waiting for some daylight!