Just before Christmas I finished what will probably be the last project of 2010, another version of my knockoff of the Vivienne Westwood Philosopy skirt, this time made out of the fabric left over from the tartan dress project.

I tweaked the pattern from my previous attempt. I pegged the skirt hem a little, although it’s still not as dramatic as the original.I haven’t tried the original on but mine is only just OK for walking in, so I don’t think I’ll try to take it in any further. I also redrafted the waistband, which on my first version was much too tight. The waistband’s still far from perfect. You can see in this view that it doesn’t form a smooth curve but has a sort of peak at the closure. This is probably because I tried to make it too curved.

The back view’s OK. There’s a slight wrinkle caused by the zipper on one side and the weight of the pleat on the other. I put interfacing in the wrong place on the zipper side and forgot to put anything at all on the other side to support the seam. I should go and write a reminder on the pattern piece! 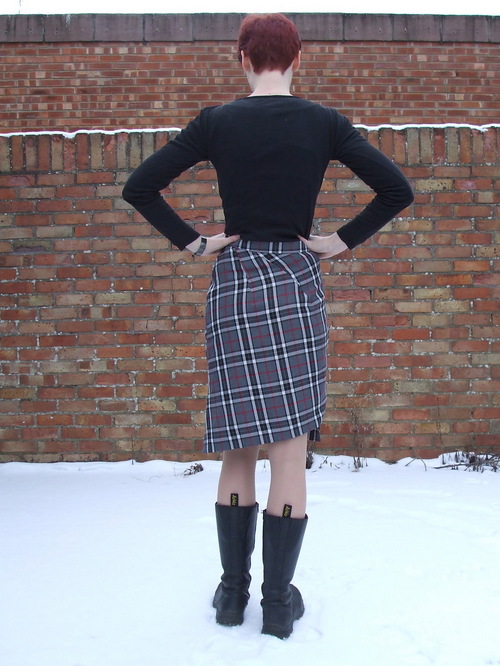 The side seam on the side with the pleats is surprisingly straight given the weight of the pleats.

The execution of this one isn’t great. There are a few wonky seams and the inside isn’t pretty (which is a shame because I used a really bright scarlet lining) but it will do. And it looks surprisingly good with my clunky steel toe-capped safety boots, which are the only footwear I’m going to be venturing outdoors in until the weather improves.