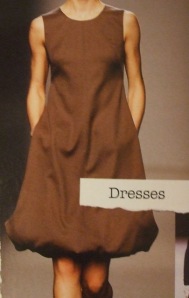 I have always really liked this Bottega Veneta balloon dress from 2006. Excuse the terrible picture quality! There’s a better picture here on Style.com.

The only thing I don’t like about it is the colour. I see this in bright orange (yes, I’m probably mad. But I have resolved to sew only what I really want to wear and right now it seems to be the weather balloon look).

I spent some time wondering what type of fabric would work. It needs to be not too drapey but not too stiff either. I found some orange cotton poplin in John Lewis which I thought would make a good lining with some body, and then spent a while looking for a fabric for the top layer with no success at all. I considered silk and chiffon but didn’t find anything I liked that didn’t cost an arm and a leg. In the end I decided to go with the poplin for both the fashion fabric and the lining.

I didn’t want to try to draft a pattern from scratch. Burda had a suitable pattern in the May 2010 issue but the neckline’s different, it has an empire line seam, and there are no shoulder yokes:

I considered trying to eliminate the empire seam but decided that was far too much like hard work, so my version’s not quite the same shape as the original.

When I traced the pattern I altered the neckline and added extra seam lines to make shoulder yokes by laying the pattern pieces for Vogue 8319 over the top of the Burda pattern and drawing new lines in roughly the right places. Not scientific but it seems to work.

So that’s the planning and preparation done. Next up, some very orange pictures of the finished dress.